About 15 years ago, in my former life, I worked in golf and got to meet many people on a daily basis. One was an auctioneer and knowing my interest in records, informed me that there was going to be several boxes of them at the next auction. I told him that I'd be there.

I arrived and looked over the items that were to be put up that night. Unfortunately, the records were lps but there were a few Verve labeled items that I thought would be nice to have if the price didn't go too high.

I sat patiently and waited for the bidding to begin and after sitting through miscellaneous furniture and bed frames, it came time for the box of records. Surprisingly, I was the only bidder and got the lot for 5 bucks.

I scooped up the box and headed home to see how Dizzy sounded on my turntable. As I was listening to the vinyl, I flipped through the rest of the albums only to find a 78 shoved into one of the covers. Not being the right size, it almost slipped out and fell to the floor but I was able to keep it from doing so...and so very glad I did. It was a 1929 Bennie Moten's Kansas City Orchestra on Victor 38091...Kansas City Squabble / New Goofy Dust Rag in excellent shape. This was the first 78 I had found that wasn't a Miller, Goodman or James (again, I was naivley a big band only 78 collector at the time).

I played it and was immediately wowed by the music. I was so much in awe of this record that I decided to frame it. I had recently learned how to mat pictures (for my mom's artwork) and decided to do something special with my Moten. I found a picture of the band, scanned it and with my computer, "aged" it, and after several attempts, finally found a design I liked and framed it.

I have it prominently displayed in my living room along with a Billie Holiday on Commodore that I had framed for someone but ended up keeping after being stiffed on the agreed payment...their loss was my gain.

My only regret is that I did not archive the music before framing. 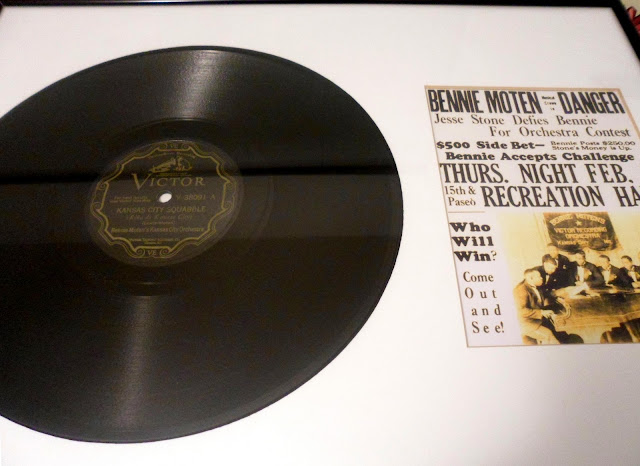