Not much information at all out there on Gloria Irving.


Magazine said she quit ( in ?) to become a blues singer. The article said that once she collected $3,500 that she would go back to school for a degree in Physical Education.

And a book on Willie Dixon says that she was one of the first females (along with Betty Everett) to get a composition from him. Before she landed at Cobra, she was the singer for Swinging Sax Kari's Orchestra. She recorded an "answer song" to Ruth Brown's Mama, He Treats Your Daughter Mean. 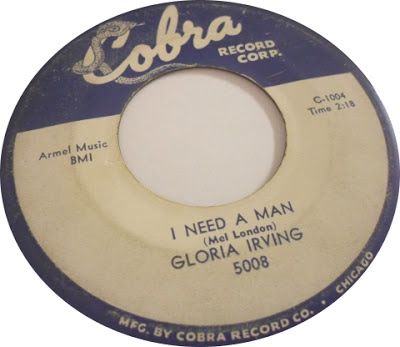 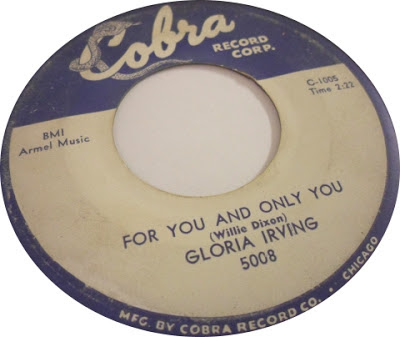 Email ThisBlogThis!Share to TwitterShare to FacebookShare to Pinterest
Labels: Cobra 5008, For You And Only You, Gloria Irving, I Need A Man, Willie Dixon

In my search for any info on Joe Candullo, the same theme popped up...not much is known or he was basically forgotten.

What is known is during an era where many white dance bands jazzed up standards, Candullo recorded many songs that were written for black jazz to begin with. 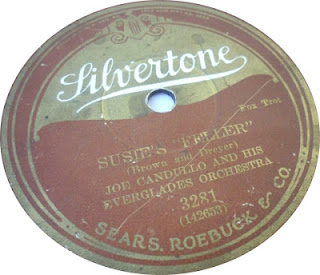 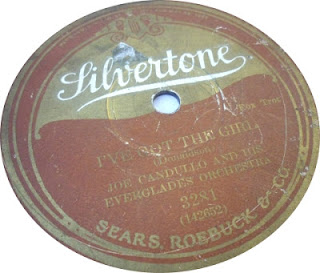 Here is the first offering from the many Blue Notes I recently discovered. Incidentally, it was the only 10 inch 78 in the bunch.

Blue Note Records is an American jazz record label, established in 1939 by Alfred Lion and Max Margulis. Francis Wolff became involved shortly afterwards. It derives its name from the characteristic "blue notes" of jazz and the blues.

Lion first heard jazz as a young boy in . He settled in in 1937, and shortly after the first From Spirituals to Swing concert, recorded pianists Albert Ammons and Meade Lux Lewis in 1939 during a one-day session in a rented studio. The Blue Note label initially consisted of Lion and Max Margulis, a communist writer who funded the project. The label's first releases were traditional "hot" jazz and boogie woogie, and the label's first hit was a performance of "Summertime" by soprano saxophonist Sidney Bechet, which Bechet had been unable to record for the established companies. Musicians were supplied with alcoholic refreshments, and recorded in the early hours of the morning after their evening's work in clubs and bars had finished. The label soon became known for treating musicians uncommonly well - setting up recording sessions at congenial times, and allowing the artists to be involved in all aspects of the record's production.

Francis Wolff, a professional photographer, emigrated to the at the end of 1939 and soon joined forces with Lion, a childhood friend. In 1941, Lion was drafted into the army for two years. Milt Gabler at the Commodore Music Store offered storage facilities and helped keep the catalog in print, with Wolff working for him. By late 1943, the label was back in business recording musicians and supplying records to the armed forces. Willing to record artists that most other labels would consider to be uncommercial, in December 1943 the label initiated more sessions with artists such as pianist Art Hodes, trumpeter Sidney DeParis, clarinetist Edmond Hall, and Harlem stride pianist James P. Johnson, who was returning to a high degree of musical activity after having largely recovered from a stroke suffered in 1940. 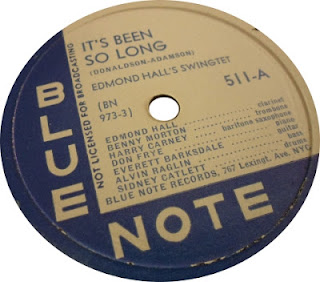 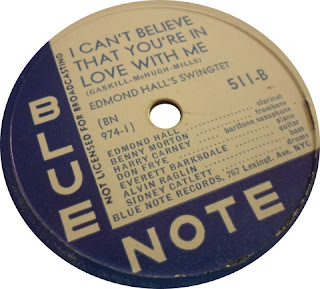 Email ThisBlogThis!Share to TwitterShare to FacebookShare to Pinterest
Labels: Benny Morton, Blue Note 511, Edmond Hall, Edmond Hall Swingtet, Harry Carney, I Can't Believe That You're In Love With Me, It's Been So Long, Sid Catlett

Charles laid low from recording until early 1953 as Atlantic executives cleared out Charles' contract with Swingtime. Charles began recording jump blues and boogie-woogie style recordings as well as slower blues ballads where he continued to show the vocal influences of Nat "King" Cole and Charles Brown. "Mess Around" became Charles' first Atlantic hit in 1953 and he later had hits the following year with "It Should Have Been Me" and "Don't You Know". He also recorded the songs, "Midnight Hour" and "Sinner's Prayer". Some elements of his own vocal style showed up in "Sinner's Prayer", "Mess Around" and "Don't You Know".

Late in 1954, Charles recorded his own composition, "I Got a Woman", and the song became Charles' first number-one R&B hit in 1955 and brought him to national prominence. The elements of "I Got a Woman" included a mixture of gospel, jazz and blues elements that would later prove to be seminal in the development of rock 'n' roll and soul music. He repeated this pattern throughout 1955 continuing through 1958 with records such as "This Little Girl of Mine", "Drown in My Own Tears", "", "A Fool For You" and "The Night Time (Is the Right Time)".

While still promoting his R&B career, Charles also recorded instrumental jazz albums such as 1957's The Great Ray Charles. During this time, Charles also worked with jazz vibraphonist Milt Jackson, releasing Soul Brothers in 1958 and Soul Meeting in 1961. By 1958, Charles was not only headlining black venues such as The Apollo Theater and The Uptown Theater but also bigger venues such as The Newport Jazz Festival. It was at the festival where he cut his first live album. In 1956, Charles recruited a young all-female singing group named the Cookies, and reshaped them as The Raelettes. Before then, Charles had used his wife and other musicians to back him up on recordings such as "This Little Girl of Mine" and "Drown In My Own Tears". The Raelettes' first recording session with Charles was on the bluesy-gospel inflected "Leave My Woman Alone". 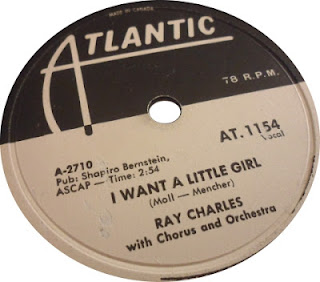 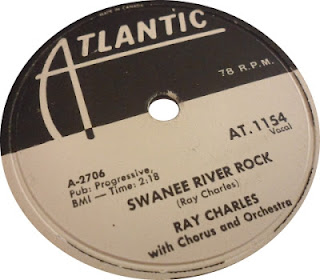