Found this one in a hardware store located in the Santurce district of San Juan (near the Avocados). Might have passed over it if not for the barely legible secondary title, Santa Baby. Checking the composers on my phone, I saw that that Papacito was indeed the same song made popular by Eartha Kitt. 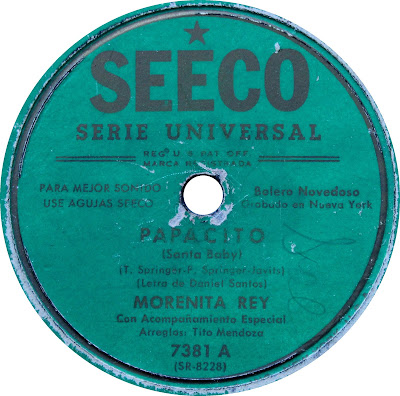 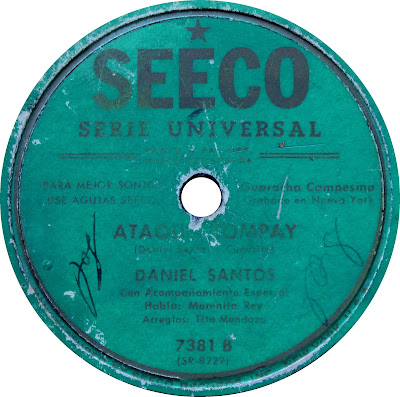 Was recently talking with a record collecting buddy and the topic of desert island records came up.

When asked, his answer took me a little by surprise knowing the scope and aim of his collection.

"Lonnie Johnson's 1948 King recording of Tomorrow Night would be my island record" he said.

I quickly typed a search for other versions of the song...such as LaVern Baker's or Horace Heidt's...and unbeknownst to both of us, we discovered that Johnson actually recorded the song with piano and bass accompaniment a year earlier in Detroit for a small R&B label."

My friend found a lone copy on ebay that evening and promptly purchased it. 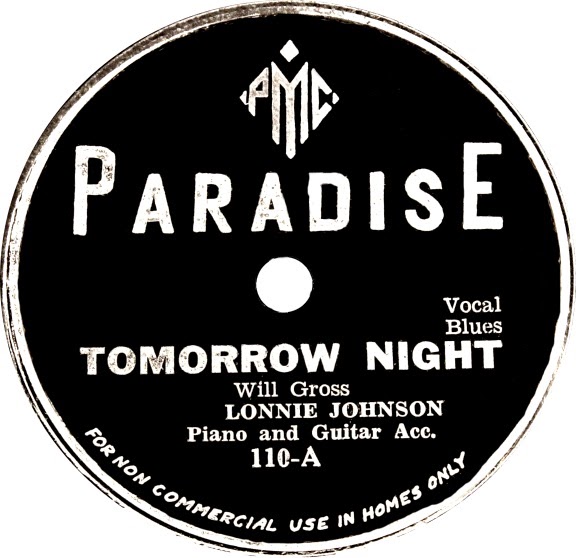 Here's the flip side for completeness. 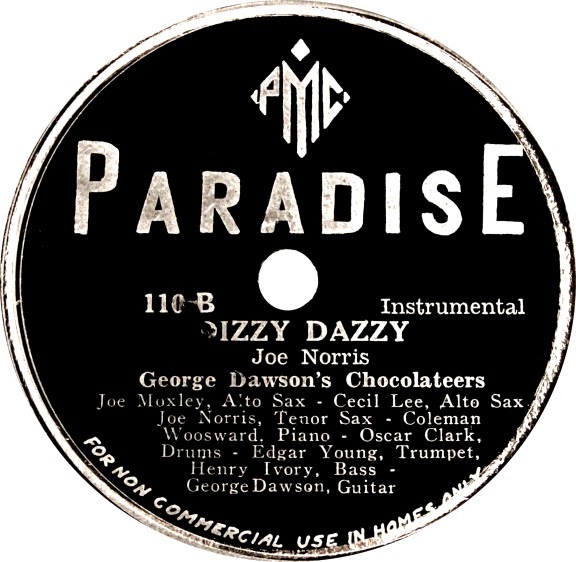 Here is the second early Cuban 78 found this Christmas in Puerto Rico.

Ernesto Lecuona y Casado (August 6, 1895 – November 29, 1963) was a Cuban composer and pianist of worldwide fame. He composed over six hundred pieces, mostly in the Cuban vein, and was a pianist of exceptional skill. His father was Canarian and his mother was Cuban.

Lecuona was born in Guanabacoa, Havana, Cuba. He started studying piano at an early age, under his sister Ernestina Lecuona, a famed composer in her own right. As a child prodigy, he composed his first song at the age of 11. He later studied at the Peyrellade Conservatoire under Antonio Saavedra and the famous Joaquin Nin. Lecuona graduated from the National Conservatory of Havana with a Gold Medal for interpretation when he was sixteen. He performed outside of Cuba at the Aeolian Hall (New York) in 1916.

In 1918 he collaborated with Luis Casas Romero, Moisés Simons, Jaime Prats, Nilo Menéndez and Vicente Lanz in setting up a successful player piano music roll factory in Cuba producing Cuban music and also copies from masters made by QRS in the USA. The brand label was "Rollo Autógrafo"

He first travelled to Spain in 1924 on a concert tour with violinist Marta de la Torre; his successful piano recitals in 1928 at Paris coincided with a rise in interest in Cuban music.

María la O, Lecuona's zarzuela, premiered in Havana on March 1, 1930. He was a prolific composer of songs and music for stage and film. His works consisted of zarzuela, Afro-Cuban and Cuban rhythms, suites and many songs which are still very famous. They include Siboney (Canto Siboney), Malagueña and The Breeze And I (Andalucía). In 1942, his great hit, Always in my heart (Siempre en mi Corazón) was nominated for an Oscar for Best Song; however, it lost to White Christmas. Lecuona was a master of the symphonic form and conducted the Ernesto Lecuona Symphonic Orchestra, employing soloists including Cuban pianist and composer Carmelina Delfín. The Orchestra performed in the Cuban Liberation Day Concert at Carnegie Hall on October 10, 1943. The concert included the world premiere of Lecuona's Black Rhapsody. Lecuona gave help and the use of his name to the popular touring group, the Lecuona Cuban Boys, though he did not play as a member of the band. He did sometimes play piano solos as the first item on the bill.

In 1960, thoroughly unhappy with Castro's new régime, Lecuona moved to Tampa and lived on West Orient Street with his relative, singer Esperanza Chediak. Lecuona lived his final years in the US. Three years later, on November 23, 1963 he died at the age of 68 in Santa Cruz de Tenerife, in the Canary Islands, as a result of an attack of asthma, a disorder which had persecuted him his entire life. He was interred at Gate of Heaven Cemetery in Hawthorne, New York, but his will instructs that his remains be repatriated once the current régime runs its course. A great deal of Lecuona's music was first introduced to mass American audiences by Desi Arnaz, a fellow Cuban and Lucille Ball's spouse.

Ernesto and Ernestina's cousin Margarita Lecuona was another accomplished musician and composer. She was the author of the song "Babalú", made popular in the Latin American world by Miguelito Valdés, and in the United States by Desi Arnaz (who, contrary to popular folklore, did not write the song). 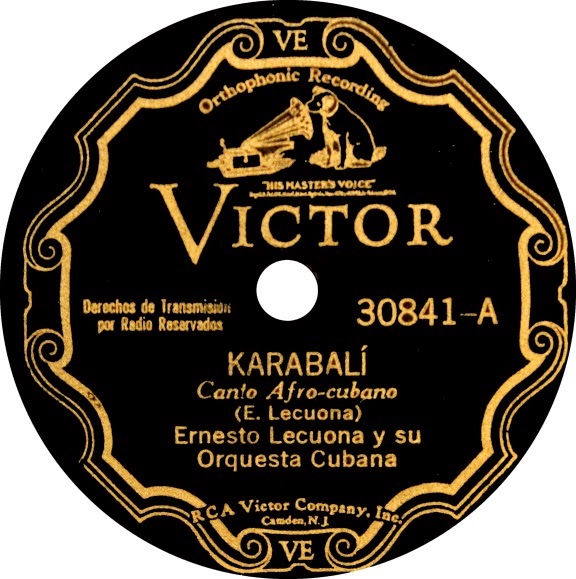 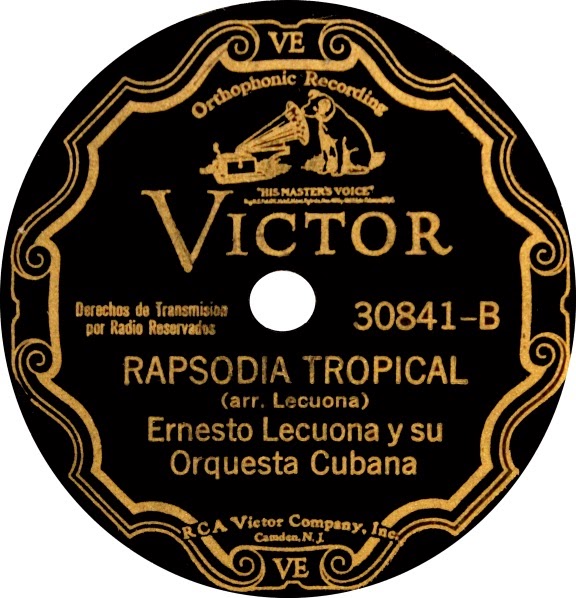 Just got back from visiting family in Puerto Rico for the Christmas holiday and, of course, I had to take a day or two and hunt for 78s. I'm always on the lookout for the early New York group of Puerto Rican musicians called Los Jardineros but have yet to find one.

Went searching a little farther out from San Juan when my wife and I ran across an antique store that had many 78s but most were of the post war, mainly Puerto Rican variety (Marvista, Seeco, Ansonia, Riney etc.)

I did, however, unearth...most literally with the dirt caked on each...two early Cuban records. Not too sure how rare or coveted they may be, if at all, but was excited to find and add them to the collection.

Having heard of the "orquesta" on one of the two (which will be posted later), I was completely in the dark on this Columbia from 1923.

Here is what I've found from wikipedia...

María Teresa Vera (Guanajay, February 6, 1895 – Havana, December 17, 1965) was a Cuban singer, guitarist and composer. She was an outstanding example of the Cuban trova movement.

She started her career as a singer in 1911 in a theatre where she sang the criolla Mercedes of Manuel Corona. Her first guitar teacher was the cigar-roller José Díaz. Manuel Corona continued her musical education by explaining such things as the different methods for first and second guitar, and eventually taught her his compositions. That was without question of the greatest benefit to the young girl.

She formed a duo with Rafael Zequeira from 1916–1924, when he fell ill and died. They had made over a hundred recordings together in New York, most of which have not survived. Then she met Carlos Godinez, a composer, who taught her more about the guitar; the friendship lasted until his death in 1950.

She then formed the Sexteto Occidente in 1925 with Miguel García as first voice, clavé and Director (because he knew most about music), Ignacio Piñeiro on double bass, Julio Torres Biart on tres, Manuel Reinoso on bongo and Francisco Sánchez on maracas. They were a group of talented musicians who would have sparkling careers.

She joined Lorenzo Hierrezuelo as a duet in 1935, and this duet lasted for 27 years. For much of this time Hierrezuelo ran his duo with Vera alongside his partnership with Compay Segundo (Francisco Repilado), as the duo Los Compadres.

One of her best compositions, the habanera Veinte años, has been performed by a number of Cuban artists; Sólo pienso en ti, a bolero–son, is also well-known. In 1945 she was contracted to Circuito CMQ for the radio program Cosas de Ayer. In the 1950s, she appeared in the TV program El Casino de la Alegría and in the 1960s she received public tributes on her retirement in 1962.

In his biography Calderon gives the opinions of 32 Cuban composers and musicians on her career. Silvio Rodríguez said of her:

"Her voice was without vibrato, dry; hitting the notes, only prolonging a note so as to slide from one tone to another, which gave [her voice] a grace, or, much better, a singular character . Her production seemed nonchalent, natural, colloquial... Always there were variations on the original melody, [since] she was always interpreting [the piece] creatively."

Pablo Milanés contented himself with saying "María Teresa is for me the embodiment of Cuban song."

María Teresa Linares, the musicologist, said of her and Hierrezuelo:

"I believe the most important period [for them] was their 27 years as a duet, Lorenzo on first guitar, Vera on second. Hierrezuelo's voice was at its best... [and] María Teresa's voice was unrivalled at the time. The quality of their appoggiaturas, adornments, refinements, and their interpretation... reached its highest point. All in all, it was the most sublime expression of the Cuban song." 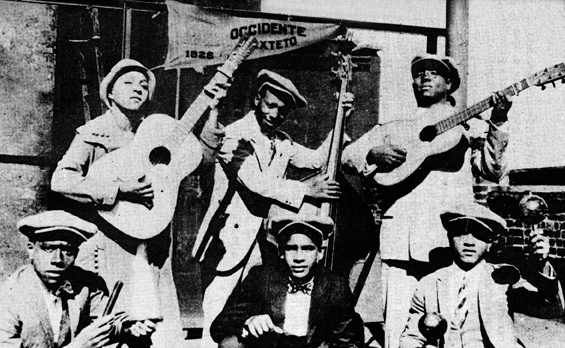 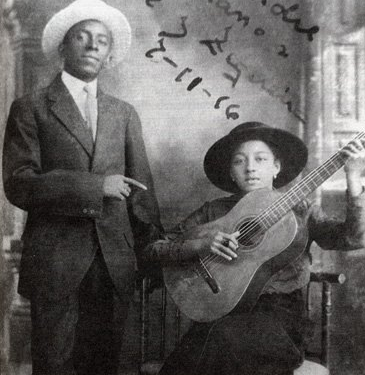 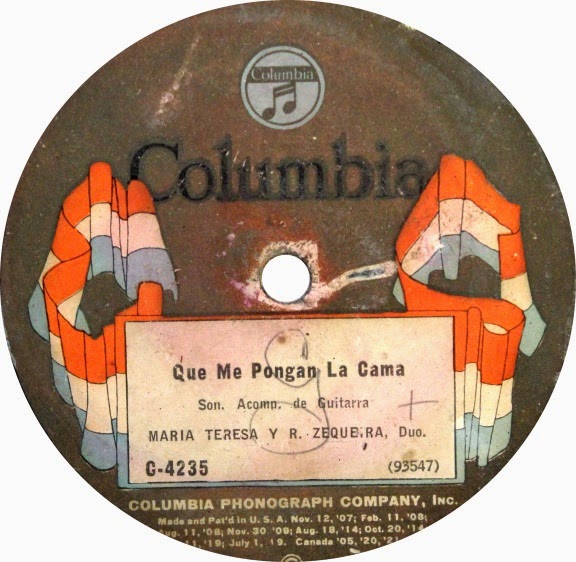 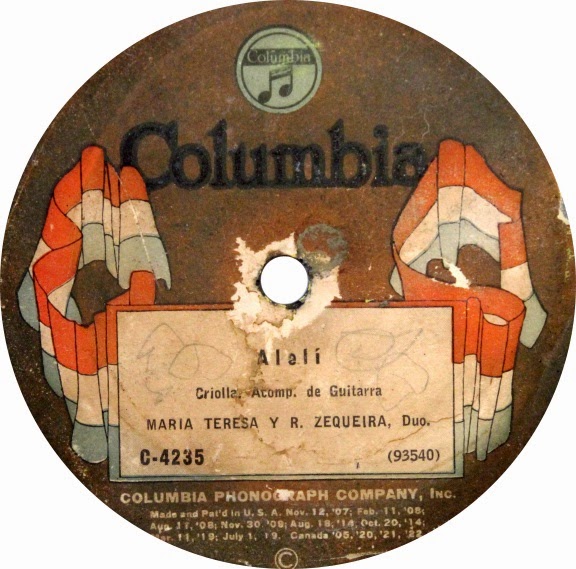