Just created a group on Facebook where I will be posting updates to this blog and tracks from my collection.

Please join HeyPally's 78 RPMs listening room and feel free to comment and post away!
Posted by HeyPally No comments:

As I Like It
Baby Dear
Posted by HeyPally No comments:

Email ThisBlogThis!Share to TwitterShare to FacebookShare to Pinterest
Labels: As I Like It, Baby Dear, Bennie Moten's Kansas City Orchestra, Okeh 8213

Beale Street Mess Around
Posted by HeyPally No comments:

I Just Want A Daddy﻿

Rose Of Brazil by the Broadway Dance Orchestra
Posted by HeyPally No comments:

I'm Going Back To Those Who Won't Go Back On Me
Posted by HeyPally No comments:

Little Darlin' was written by Maurice Williams with both melody and doo-wop accompaniment strongly emphasizing the clave rhythm. It was first recorded by Excello Records in January 1957 and quickly released as a rhythm-and-blues song by Williams's R&B group, The Gladiolas. The song is noted for its spoken recitation by the lead singer ("My Darlin' I need you...").

The Gladiolas, featuring Williams, were from Lancaster, South Carolina, where they had been together since high school. Their original version of the song was on the small Excello label. (Excello primarily recording "swamp blues" songs in Crowley, Louisiana.)

The Gladiolas song peaked at number 11 on the R&B charts in April 1957, but barely dented the hot 100. By 1959, Williams' group became "Maurice Williams and the Zodiacs" with the rock 'n roll- R&B hit Stay. 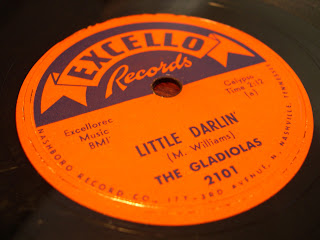