It was early fall and with the weather cooling down a bit, yard sales started sprouting up again. Searching the local ads, I spotted one boasting a “Victrola & Some Records.” Seeing that it was relatively nearby, I set my alarm for an early rise on Saturday…something I’m not always game for.

With the family still asleep, I backed out of the driveway and headed to see what “Some Records” meant.

As I turned the corner, I could see the upright Victrola in the driveway. An elderly lady was looking it over while the owner was playing a green labeled hot dance on it. I overheard the owner’s story about how it belonged to a great-aunt who lived in rural . I waited impatiently for the crowd of one to drift over to another item. It didn’t take long for me to get the chance and opening the cabinet doors, I saw each shelf stacked with records. Pulling them out carefully, to let the owner see that I knew how to handle the records, I discovered that the majority of these were old-time country…Herschel Brown, Stripling Bros., Jimmie Rodgers, Gid Tanner, Charlie Poole & The North Carolina Ramblers…with the remainder being dime store dance fare. I did glance over a “Memphis Jug Band” but at this juncture in my collecting, I wasn’t familiar with the band or its output. (I’ve learned a little since then)

Even though the Victrola was in excellent shape, I wasn’t interested in buying it, especially at the asking price, let alone trying to lug it back home. I approached the owner and asked if they would be willing to sell the records separately for a third of the price of the Victrola & records. I was told no, “How could I sell the phonograph without records to go with it?” I countered with saying that I could leave about a dozen or so. The owner thought about it but seeing that the yard sale had just begun, felt that there were more opportunities to sell the bundle for the asking price. As much as I wanted the records, I left dejected and empty handed.

I got home about an hour later and explained the situation to my wife. After eating breakfast, I hopped on the computer to search eBay for listings of any of the titles I could remember. Remembering “Memphis Jug Band,” I typed it in and found an auction in progress with the high bid well over the asking price for the “Victrola & Some Records.” Showing this new tidbit of information to my wife, I said that I needed to go back and get the whole shebang. But it was after noon already and I was sure that a knowledgeable collector had already sauntered by and coolly laid out a handful of bills for the little treasure plus a little extra as a thank you…yeah my mind does stuff like that.

Seeing me mope around for a bit, my wife told me to get in the car and stop wondering. After loading up the family in the only vehicle that would haul the unwanted phonograph, the 45 minute drive was excruciating. Every stoplight or blue hair blocking the passing lane added to my frustration. Finally, turning that corner, to my delight I saw the player still in the driveway. But just to dim that delight a bit, I immediately thought about the wax being exposed to the elements for the better part of a sunny day…imagining that they had all warped not unlike subject matter in a Salvador Dali painting.

I quickly thumbed through the stash to see the scroll Victor # 21066 still there…as was everything from before. Sheepishly approaching the owner again and before I could hand over the money, I was informed that it was no longer the asking price from that morning…it was now half price!

Paying and thanking the person, I emptied the shelves, stacked the records in a box that I had brought and loaded the player in back.

Within a few weeks I was able to sell off the old-time collection on eBay, which more than offset the purchase price.

And following the auction that I had discovered that day of the Memphis Jug Band…which happened to be the exact same recording I now owned…I found out that the final bid had tripled from when I had first seen it.

Now that’s what I’m talkin’ about! 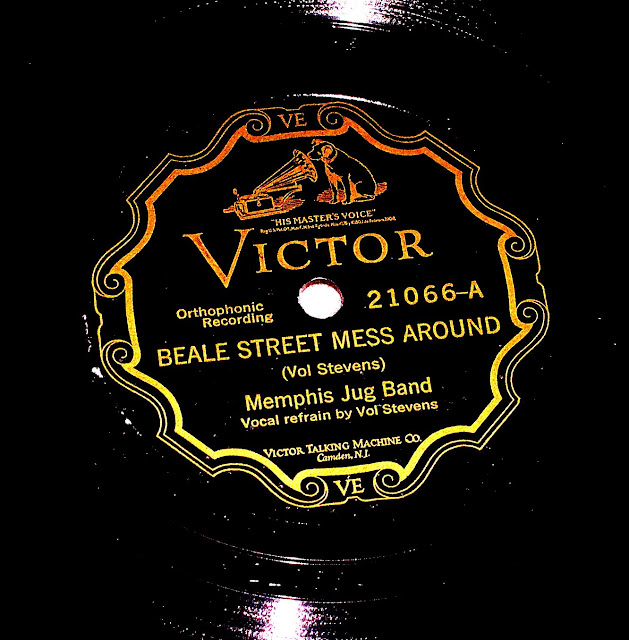