Thrill Of The Hunt

It was May 19, 2010 and I was getting the family packed in the van for a 2 day trip up to the beach house. In the back of my mind I was thinking about the old, main street USA, sleepy town antique store that we had visited on the trip home last summer. I had seen a forum post about this place on a record collectors’ site based out of Birmingham. Someone had mentioned a 2 story corner store where the whole 2nd floor warehouse was wall to wall records…but warned that there was no air conditioning or ventilation.

We put the address in our and navigating the local detours, finally found it. I mentioned the post to the owner and he said that he had heard of it and directed me upstairs. Faint lighting and that antique musty odor were the first things I noticed.

As I looked around…it really was wall to wall records…LPs, 45s and 78s. I was going to start up one end and make my way back to the stairs on the other side. Just a few minutes into my search, the proprietor came up and told me that my little girl needed to use the restroom. Oh yeah, I had my whole family in our newly purchased van (in air conditioned comfort no less) and we had our oldest potty trained. I ran out to the van after carefully laying down a few shellac prospects on an old cane chair near the stairwell. We came back upstairs and went into a bathroom that looked like it hadn’t been used in decades. Afterwards, I asked my little girl if she would like to help me flip through the records and she cheerfully said yes. (She did locate a 78 with Rudolph on it…she may now have the fever like her old man…time will tell)

After just a year…I can only remember one specific record I found that day. I had been walking toward the stairwell to checkout my armful of records when an old black Columbia sitting on a chair caught my eye. I picked it up and could barely make out “Barbecue Bob” & “Yo Yo Blues.” The label was all scratched up but it was definitely my biggest...and to date...only blues find outside of a controlled eBay type setting. After paying about $2 per record, we headed out to the van. The owner followed us out and met everyone (again…the bathroom message) and waved goodbye like a Clampett during the closing credits.

Cut back to Wednesday the 19th. After cramming the van and getting settled into captains’ chairs and car seats, we were finally on our way. Still with the store on my mind, I began to realize that I couldn’t remember the name of the store nor the town in Georgia it was even located. My wife looked in the stored favorites section of the and lo and behold, there it was. We inserted it into our route and saw that we would arrive around 3:30.

Next came the task of finding a phone number to see if he was even still in business. My wife searched her cellphone but could find no listing. She did, however, call the Chamber of Commerce and they informed us that he was indeed open but probably only until 5:00. No problem, I would have at least an hour to look around.

After finding out that a quick visit with my sister along the way wouldn’t happen, we turned and headed north…only to realize that we were now in EST. We had just lost an hour. I would now only have 15 minutes to look around. I reached over and canceled the route to the store. My wife said that I should go anyway and after a few reasonable excuses back and forth as to why or why not to go…she had convinced me to turn left.

We pulled up to the open door at the brick corner store and with just a few minutes on the clock til closing, I grabbed my wallet and cell (bathroom breaks were more common with 2 kids now potty trained) and walked into the familiar spot only to find an elderly lady sorting boxes. She greeted me and I was quickly reminded of my Grandmother with the southern accent and deliberate way of speaking. I told her about my last visit and asked about the upstairs but she said that the rent for the 2nd floor was too expensive so he had everything stuffed downstairs and that she was in the process of sorting the records to make traffic more manageable. I asked, as all I could see were LPs, where the 78s might be. She asked me if those were the thick ones and said that there were a few lying around somewhere but she couldn’t remember exactly just where.

As I was looking high and low for a stack of shellac, she proceeded to talk about local town council affairs. I was having no luck in finding a single 78 where as the year before they were everywhere. I had made my way from the back to the front door and almost unknowingly, or maybe instinctively (yeah, right!), started back around for a 2nd search. I gravitated towards the lady just because I was still halfheartedly acknowledging her conversation with a few weak “wows” or “reallys?”

Then I saw through the diamond shaped holes of an old milk crate, which was underneath a large cardboard box of vhs cassettes, a 78 rpm record. I heard myself say “here's a few” but she probably didn’t hear me over her corrupt council diatribe. I saw an old felt shopping bag inside the crate and also a naked stack of records. Lying on top of the naked stack was “White Christmas” by Les Brown or some similar orchestra…not a promising start. After that stack was flipped through, resulting in absolutely nothing, I pulled back the felt bag to see a vertical bundle of 78s, each with a sleeve that was rounded off by what looked like rat bites. I pulled the first one back to see a wonderful old Vocalion label. It was Tampa Red’s Hokum Jug Bad with Half Pint Jaxon. Wow! I knew that this was a collectible blues record and I had never seen anything like this in person before. With shaking hands, I gently set it flat on the table and went for the next record. Another Vocalion “Race” record, this time it was Leroy Carr. "What have I stumbled upon?" asking myself, as I now realized, judging from the uniformed storage and “bite” patterns, that this batch of platters was all from the same place…wherever that may have been? I was feeling my heart race as I pulled out the next 78…a Paramount label…I had never seen one in the wild before that was NOT a polka (I hunted 78s through Wisconsin a while back.) I looked closer and read Blind Lemon Jefferson. I almost experienced syncope. I now hear the lady still talking all the while heat was building up around my neck.

As I was flipping and stacking, I came across Lonnie Johnson on Okeh, another Blind Lemon, Leroy Carr & Tampa Red. I found a Lillian Glinn on Columbia, Bessie Smith on Columbia, Weaver & Beasley on Okeh, Sylvester Weaver on Okeh, Jim Jackson on Vocalion, Elder Richard Bryant’s Sanctified Singers on Okeh, Rev. Rice's Sanctified Singers on Vocalion along with 2 other gospel blues records. A John Lee Hooker on Chess and Lightnin’ Hopkins on Aladdin were the newest sides in the bunch. 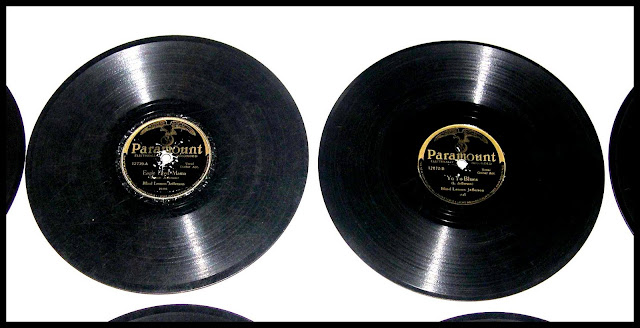 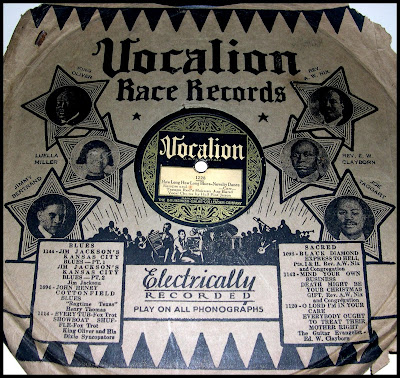 All I could think about was getting these purchased and secured. I squeaked out a “How much each for the 78s?” She told me that the owner would be back soon as it was now closing time and that he would be able to tell me. I carried the records up to the front more carefully than they had ever been carried before judging from their storage in a floppy bag. She called the owner and said he was walking in from the parking lot and as he entered, she informed him of the story of when I visited the year before. After a minute or so, he actually remembered me…I think the child’s restroom request was the kicker.

Now came the moment of truth. He asked what I had found and started to count the records. I tried to act as nonchalant as possible as if I could just walk out without them if the price was too high and still have a smile on my face…which, of course, could not have been further from the truth. After he held and flipped each record in the manner of what seemed to me like an apprenticed pizza dough tosser, he looked at me and asked how $40 sounded. I calmly replied that I had $31 in my pocket and I was going to see if my wife would let me have a ten. I walked out, tapped on the window and said I needed $10. I don’t know if any excitement was showing on my face but she smiled and fished out the bill. I walked back in to find that he had the records wrapped in a plastic grocery bag and I exchanged a ten for a dollar.

With the stack of records firmly in my possession, I opened the van door and set them in the seat and whispered to my wife, “Do not touch these!” What seemed a reasonable request at the time comes across as rudeness in typeset.

I turned around to see the man had followed me out saying he remembered that I had children. I told him that there was an addition to the family and walked around to open the door. All I wanted to do was get in the van and pull away feeling that each mile down the road, the chance of this guy coming after me wanting the records back was less and less likely.

After the goodbye niceties were complete, I climbed into my seat and noticing I had nowhere to safely set the records, my loving wife volunteered to carry them in her lap for the next 3 hours. I know I must have had a coronary driving over every railroad track but we finally made it to our intermediate destination.

And to think I was going to pass right on by.