Barney Josephson, the founder of Cafe Society in 's first integrated nightclub, heard the song and introduced it to Billie Holiday. Other reports say that Robert Gordon, who was directing Billie Holiday's show at Cafe Society, heard the song at and introduced it to her. Holiday first performed the song at Cafe Society in 1939. She said that singing it made her fearful of retaliation but, because its imagery reminded her of her father, she continued to sing the piece making it a regular part of her live performances. Because of the poignancy of the song, Josephson drew up some rules: would close with it; the waiters would stop all service in advance; the room would be in darkness except for a spotlight on 's face; and there would be no encore.

approached her recording label, , about the song, but the company feared reaction by record retailers in the South, as well as negative reaction from affiliates of its co-owned radio network, CBS. Even John Hammond, Holiday's producer, refused so she turned to friend Milt Gabler, whose Commodore label produced alternative jazz. sang "Strange Fruit" for him a cappella, and moved him to tears.

allowed a one-session release from her contract in order to record it and Frankie Newton's eight-piece Cafe Society Band was used for the session. Because he was worried that the song was too short, Gabler asked pianist Sonny White to improvise an introduction so that only starts singing after 70 seconds. Gabler worked out a special arrangement with Vocalion Records to record and distribute the song.

She recorded two major sessions at Commodore, one in 1939 and one in 1944. The song was highly regarded and the 1939 record sold a million copies, in time becoming 's biggest-selling record. 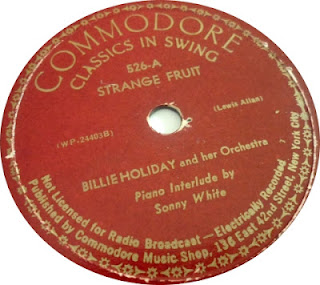 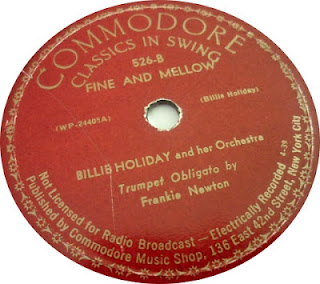 "Big Noise from " is a jazz composition co-written by composer and bass player Bob Haggart, and first recorded in 1938, featuring Haggart and drummer Ray Bauduc, both members of a sub-group of the Bob Crosby Orchestra called "The Bobcats". The recording is remarkable for its unusual duet feature: Haggart whistles the melody and plays the bass, while only Bauduc accompanies him on the drums. Halfway through the solo, Bauduc starts drumming on the strings of the double bass, while Haggart continues to play with his left hand, creating a percussive bass solo. The original version was just bass and drums but many other arrangements have been performed including one by the Bob Crosby big band with the band's vocal group.

After the success of the initial recording, Haggart and Bauduc performed this song frequently for the rest of their careers, including in several films, most notably in 1941's Let's Make Music and 1943's Reveille with Beverly. The original recording was featured on the soundtrack of Raging Bull. Nick Nolte and Debra Winger danced to a version credited to Bob Crosby and the Bobcats in the 1982 film Cannery Row.

The song was a spontaneous composition, created at the Blackhawk in in 1938. When some of the band were late getting back from a break, Haggart and Bauduc started free improvising while they waited and "Big Noise" was the result. It was a joint composition, later formalized by arranger Haggart. Later, lyrics were written. 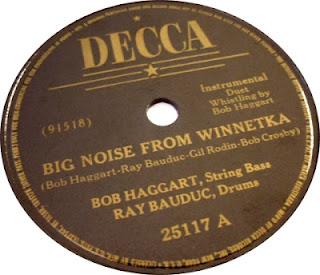 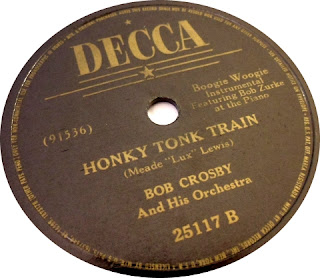 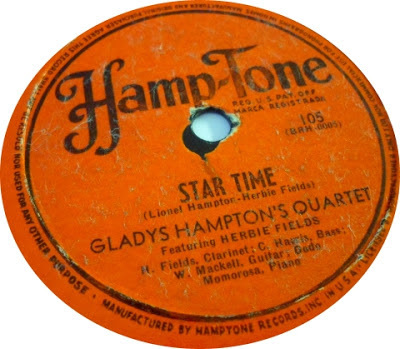 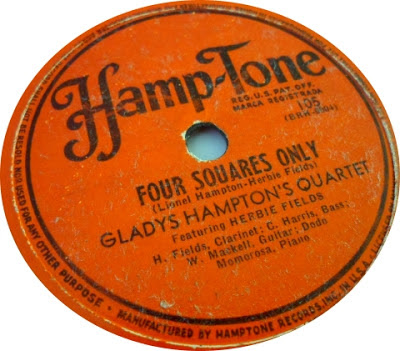 Jack McVea (November 5, 1914 – December 27, 2000[1]) was an American swing, blues, and rhythm and blues woodwind player; he played clarinet and tenor and baritone saxophone. His father was the noted banjoist Satchel McVea, and banjo was Jack McVea's first instrument.

Born John Vivian McVea in , and playing jazz in for several years, he joined Lionel Hampton's orchestra in 1940. From 1944 on he mostly worked as a leader. Perhaps his most impressive performance as a sideman in those years was at the first Jazz at the Philharmonic concert in 1944. From 1966 till his retirement in the 1980s he led a group which played traditional jazz at , called "The Royal Street Bachelors" in . The good looking "bachelors" as they thought, created their bands name after performing for the first time on . The trio consists of the following men- Jack McVea, Herb Gordy and Harold Grant.

McVea was leader of the Black & White Records studio band and was responsible for coming up with the musical riff for the words "Open the Door, Richard". Ralph Bass got him to record it in 1946 and it became immensely popular, entering the national charts the following year, and was recorded by many other artists.

He is also known for his playing on T-Bone Walker's "Call It Stormy Monday (But Tuesday Is Just As Bad)." McVea also played on 1945's "Slim's Jam" by Slim Gaillard alongside Charlie Parker and Dizzy Gillespie. 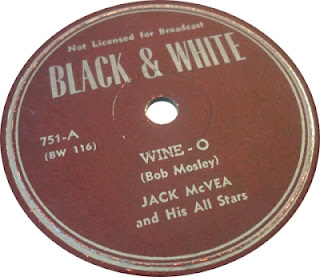 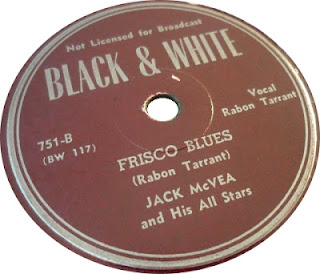 Email ThisBlogThis!Share to TwitterShare to FacebookShare to Pinterest
Labels: Black And White 751, Frisco Blues, Jack McVea And His All Stars, Rabon Tarrant, Wine-O

Israel Crosby (January 19, 1919 – August 11, 1962) was an African-American jazz double-bassist born in , best known as member of the Ahmad Jamal trio from 1957 to 1962. A close contemporary of Jimmy Blanton, is less considered as a pioneer, but his interactive playing in Jamal's trio and that of George Shearing shows how easily and fluently he displayed a modern approach to jazz double bass. He is credited with taking the first recorded bass solo on his 1935 recording of 'Blues for Israel' with drummer Gene Krupa (Prestige PR 7644) when he was only 16. He died of a heart attack two months after joining the Shearing Quintet. 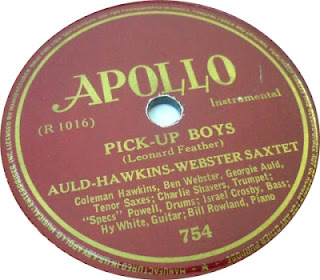 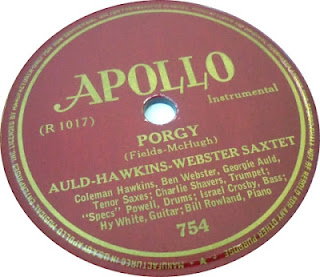 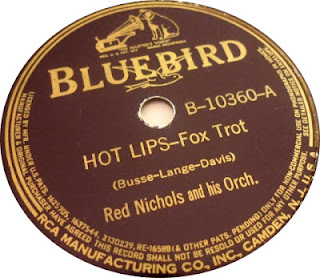 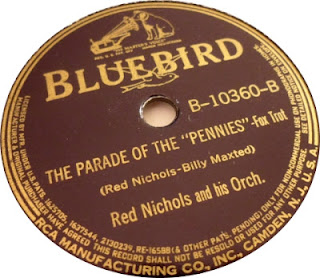 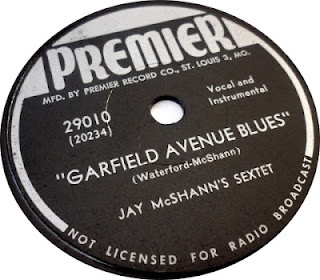 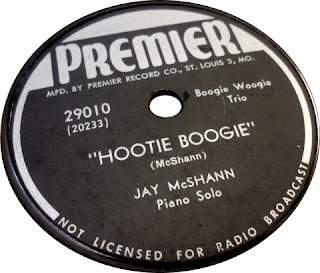 Bunn recorded with such musicians as Sidney Bechet, Johnny Dodds, Jimmie Noone, J.C. Higginbotham and Lionel Hampton. After he recorded four solo numbers for Blue Note, his popularity apparently declined.

By the 1970s Bunn played electric guitar almost exclusively in R&B bands. He died on in .

's career in music began in the band of Horace Henderson as a roadie (or, as called them, "valet"). Prior to this he had played in the band of the West Virginia State College. After his period with he played in carnival bands on traveling road shows. In the middle of the 1930s he began to get jazz gigs with Lil Armstrong, Frankie Newton, Sammy Price, Coleman Hawkins, and Benny Carter.

After moving to , he accompanied Ella Fitzgerald on tour and on record. He served briefly in the military during World War II, but returned to jazz playing on the West Coast in 1943. He played with Cee Pee Johnson in in 1947.

Alongside his guitar playing, also sang with the Spirits of Rhythm, and led a group called the Four Blazes. From the 1950s he did freelance work with West Coast jazz musicians and also became active as a record producer. In the 1970s he took up electric bass alongside the guitar, and recorded with both instruments.

These two sides are from the last recording session by The Spirits Of Rhythm on January 24, 1945 in Los Angeles. 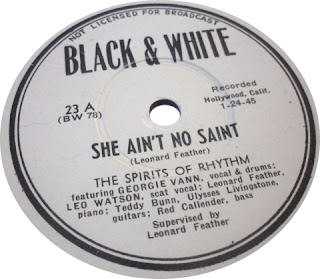 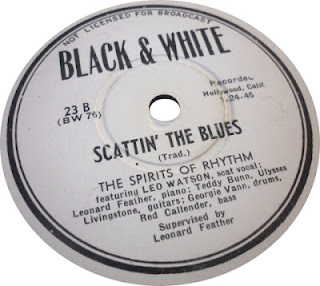 Here is the other Herbie Haymer recording on Sunset featuring Nat King Cole (as Eddie Laguna) and Charlie Shavers (as Joe Schmaltz). 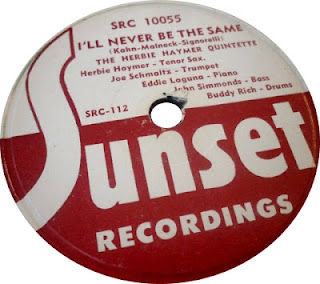 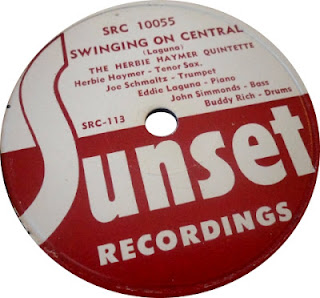