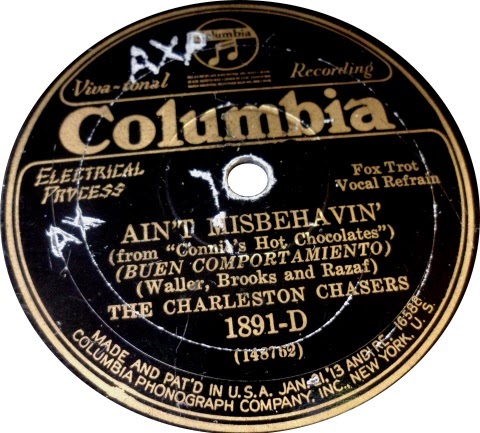 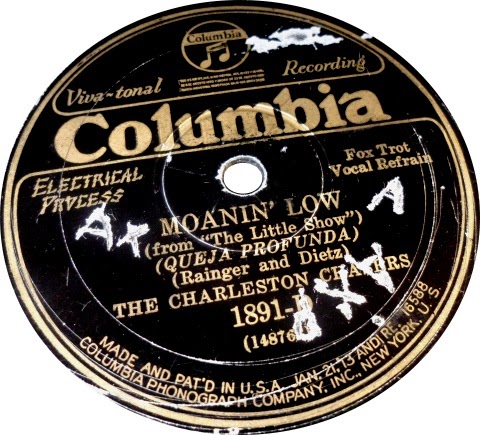 Here are two other takes issued on Vocalion from the same session.

Edward Clifton Allen's family moved to St. Louis, Missouri, when he was seven; he began playing piano at age ten and settled on cornet soon after. He worked as a truck driver in his teens and played in military bands. By the mid-1910s he was playing professionally in local nightclubs and bars. He moved to Seattle to take a gig with Ralph Stevenson, then returned to St. Louis to play on the Streckfus line of riverboats that ran between New Orleans and St. Louis on the Mississippi River. Early in the 1920s he played in the band of Charlie Creath, but by 1922 he had his own ensemble, the Whispering Gold Band, aboard the S.S. Capitol.

In 1924 Allen made his way to Chicago and played with Earl Hines until 1925. Allen then played from 1925 to 1927 in a revue called Ed Daily's Black and White Show, as a member of Joe Jordan's group, the Sharps & Flats. In the second half of the decade Allen recorded extensively with Clarence Williams in the group later known as the LeRoy Tibbs Orchestra. This ensemble also accompanied Bessie Smith on some recordings. Around this time Allen also recorded in several bands of King Oliver's.

Allen played in various dance bands through the 1930s and 1940s, then played with Benton Heath in New York City from the mid-1940s up until 1963. His last appearance on record was in England with Chris Barber in the 1950s. After 1963 Allen's failing health resulted in his retirement from music. 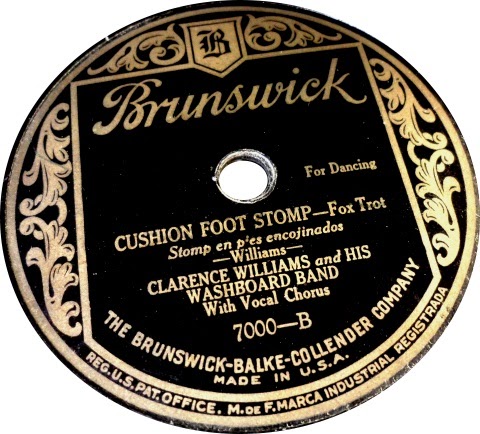 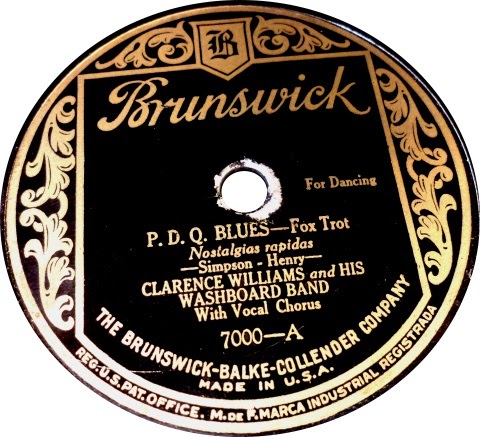 Allen's career began in Sidney Desvigne's Southern Syncopators. He was playing professionally by 1924 with the Excelsior Brass Band and the jazz dance bands of Sam Morgan, George Lewis and John Casimir. After playing on riverboats on the Mississippi River he went to Chicago in 1927 to join King Oliver's band. Around this time he made recordings on the side in the band of Clarence Williams. After returning briefly to New Orleans, where he worked with the bands of Fate Marable and Fats Pichon, he was offered a recording contract with Victor Records and returned to New York City, where he also joined the Luis Russell band, which was later fronted by Louis Armstrong in the late 1930s.

In 1929 Allen joined Luis Russell's Orchestra where he was a featured soloist until 1932. Allen took part in recording sessions that year organized by Eddie Condon, some of which featured Fats Waller and/or Tommy Dorsey. He also made a series of recordings in late 1931 with Don Redman, and in 1933 he joined Fletcher Henderson's Orchestra where he stayed until 1934. He played with Lucky Millinder's Mills Blue Rhythm Band from 1934 to 1937, when he returned to Luis Russell for three more years by the time Russell's orchestra was fronted by Louis Armstrong. Allen very seldom received any solo space on recordings with Armstrong, but was prominently featured at the band's personal appearances, even getting billing as a featured attraction.

As a bandleader, Allen recorded for Victor from 1929 through 1930. He made a series of recordings as co-leader with Coleman Hawkins in 1933 for ARC (Banner, Melotone, Oriole, Perfect, Romeo, etc.) and continued on as an ARC recording artist through 1935, when he was moved over to ARC's Vocalion label for a popular series of swing records from 1935 through late 1937. A number of these were quite popular at the time. He did a solitary session for Decca in 1940 and two sessions for OKeh in 1941. After World War II, he recorded for Brunswick in 1944, Victor in 1946, and Apollo in 1947.

Allen continued making many recordings under his own name, as well as recording with Fats Waller and Jelly Roll Morton, and accompanying such vocalists as Victoria Spivey and Billie Holiday. After a short stint with Benny Goodman, Allen started leading his own band at The Famous Door in Manhattan. He then toured with the band around the USA into the late 1950s.

In December 1957, Red Allen made an appearance on the "Sound Of Jazz" television show. In 1959 Allen made his first tour of Europe when he joined Kid Ory's band. From 1954 until the club ceased its jazz policy in 1965, Allen led the house band at New York's Metropole Cafe.

Allen returned to working under his own name making numerous tours of the United States and Europe. He was diagnosed with pancreatic cancer in late 1966, and after undergoing surgery, made a final tour of England ending six weeks before his death on April 17, 1967 in New York City. He left behind his widow, Pearly May, and a son, Henry Allen III. 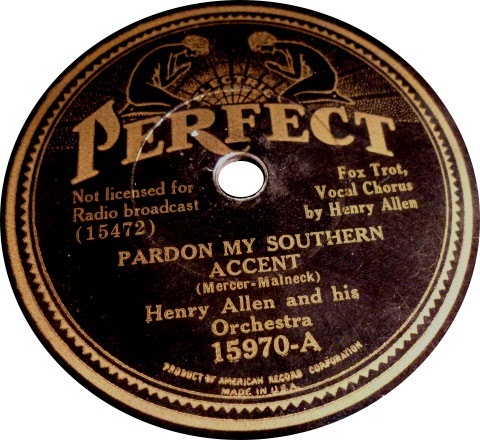 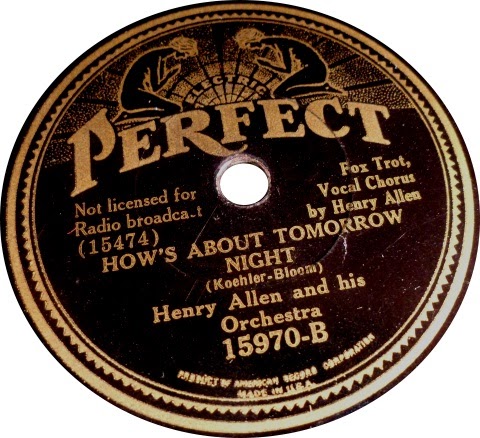 Papa Charlie Jackson (November 10, 1887 – May 7, 1938) was an early American bluesman and songster who accompanied himself with a banjo guitar, a guitar, or a ukulele. His recording career began in 1924. Much of his life remains a mystery, but it is probable that he was born in New Orleans, Louisiana, and died in Chicago, Illinois in 1938.

Born William Henry Jackson, he originally performed in minstrel and medicine shows. From the early 1920s into the 1930s, Jackson played frequent club dates in Chicago, and was noted for busking at Chicago's Maxwell Street Market. In August 1924, he recorded the commercially-successful "Airy Man Blues" and "Papa's Lawdy Lawdy Blues" for Paramount Records. One of his following tracks, "Salty Dog Blues", became his most famous song. Among his recordings are several in which he accompanied classic female blues singers such as Ida Cox, Hattie McDaniel, and Ma Rainey.

Blues writer Bruce Eder says that Jackson achieved "a musical peak of sorts in September of 1929 when he got to record with his longtime idol, Blind (Arthur) Blake, often known as the king of ragtime guitar during this period. 'Papa Charlie and Blind Blake Talk About It' parts one and two are among the most unusual sides of the late '20s, containing elements of blues jam session, hokum recording, and ragtime". A few more recordings for the Paramount label followed in 1929 and 1930. In 1934 he recorded for Okeh Records, and the following year he recorded with Big Bill Broonzy. Altogether, Jackson recorded 66 sides during his career.

Jackson was an influential figure in blues music, the first blues musician to make records. He was one of the first musicians of the "Hokum" genre, which uses comic, often sexually suggestive lyrics and lively, danceable rhythms. He wrote or was the first to record several songs that became blues standards, including "Spoonful" and "Salty Dog". Nonetheless, he has received little attention from blues historians.

Jackson's "Shake That Thing" was covered by Mother McCree's Uptown Jug Champions in 1964. "Loan Me Your Heart" appeared on The Wildparty Sheiks eponymous album in 2002. The Carolina Chocolate Drops recorded "Your Baby Ain't Sweet Like Mine" on their Grammy Award winning 2010 album, Genuine Negro Jig, and often played the song in interviews after its release.


In 1973 Jackson's song "Shake That Thing" was briefly featured in the Sanford and Son episode, "The Blind Mellow Jelly Collection". Fred, played by Redd Foxx, could be seen dancing and singing to it at the beginning of the episode. 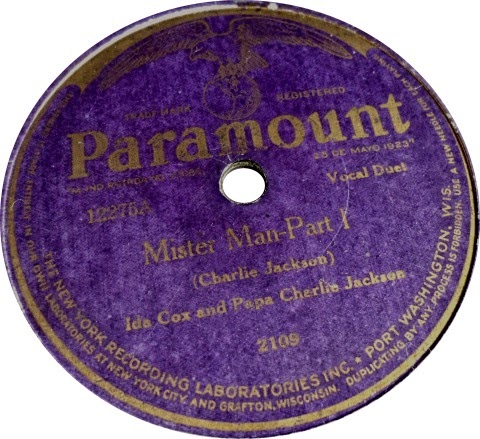 From what I've researched, there are no cd compilations of this deserving band. This should definitely be remedied.

Rust has the entire band unidentified other than vocalists and Pope himself but drummer, Johnny Blowers' autobiography Back Beats and Rim Shots: The Johnny Blowers Story, solves the mystery on page 19.

Would anyone, who happens to stumble upon this post, have any information they could share regarding sax man, Sonny Thorpe? It would be gratefully appreciated. 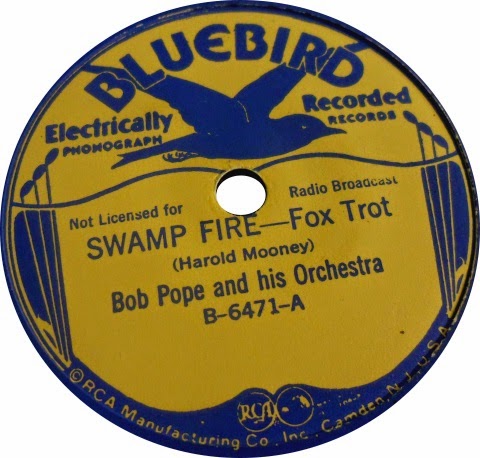 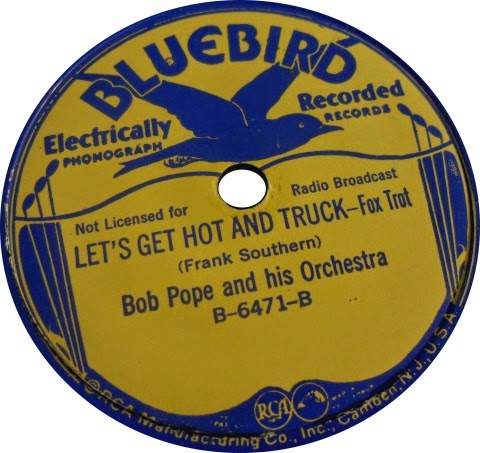 These sides suffer from blast distortions, but...here they are anyway.

Really like Jazzin' so I need to be on the lookout for an upgrade. 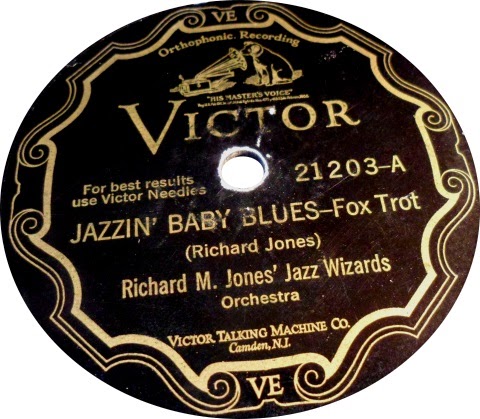 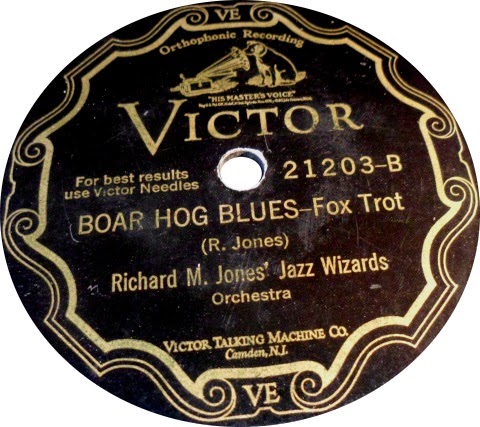 Parham was born in Winnipeg, Manitoba, Canada but grew up in Kansas City. He worked as a pianist at The Eblon Theatre being mentored by the ragtime pianist and composer James Scott, and later touring with territory bands in the Southwestern United States before moving to Chicago in 1926. He is best remembered for the recordings he made in Chicago between 1927 and 1930, as an accompanist for Johnny Dodds and several female blues singers as well as with his own band. Most of the musicians Parham played with are not well known in their own right, though cornetist Punch Miller, banjoist Papa Charlie Jackson, saxophone player Junie Cobb and bassist Milt Hinton are exceptions.

His entire recorded output for Victor are highly collected and appreciated as prime examples of late 1920s jazz. His style of jazz was comparable to the sophisticated style of Jelly Roll Morton. Parham favored the violin and a number of his records have a surprisingly sophisticated violin solos, along with the typical upfront tuba, horns and reeds. Parham wrote most, if not all of his material.

After 1930 Parham found work in theater houses, especially as an organist; his last recordings were made in 1940. His entire recorded output fits on two compact discs. 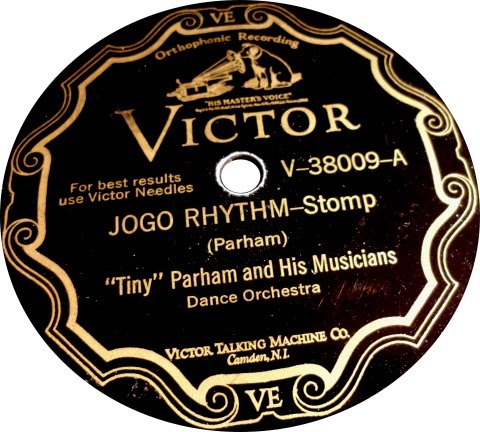 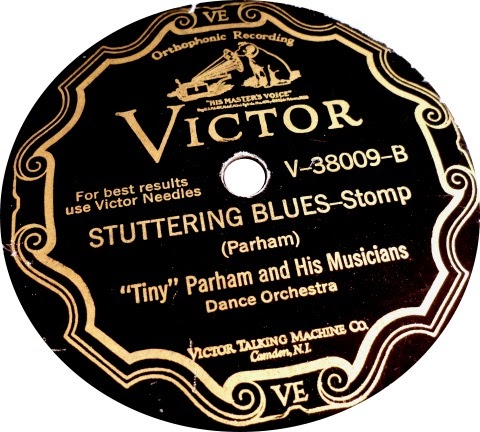 Here we have Fletcher Henderson's first recordings as a band leader. He recorded a piano solo for Black Swan four months earlier but it wasn't released.

The only personnel identified are: 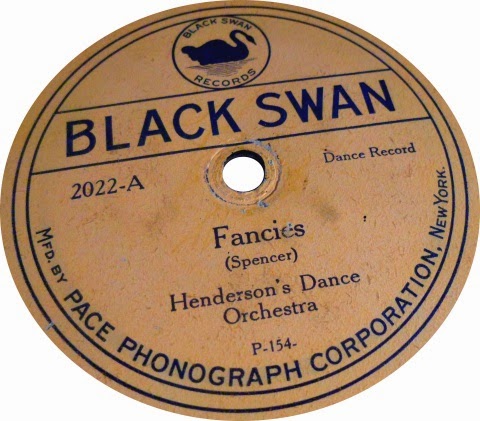 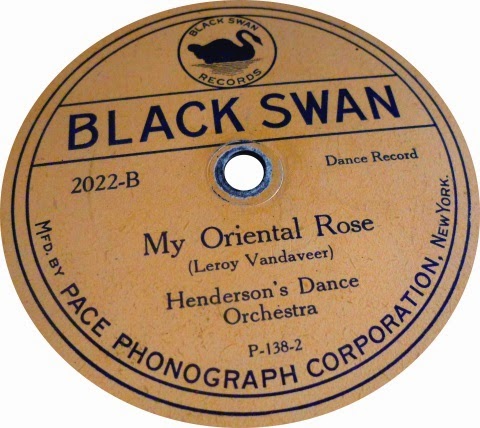 Four hours of record hunting yesterday and this was all I could find... 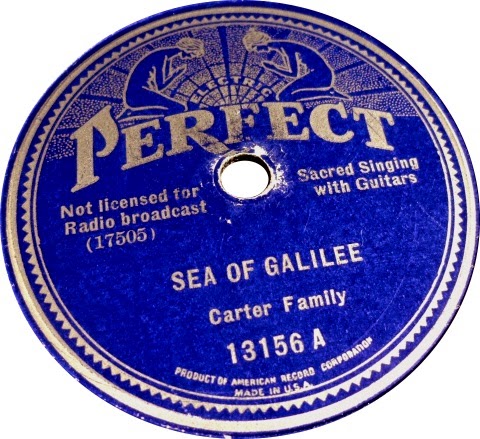 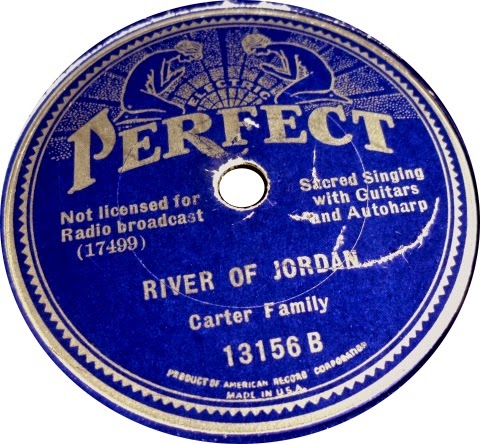 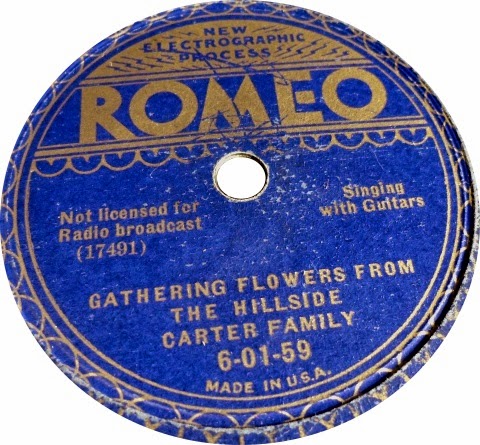 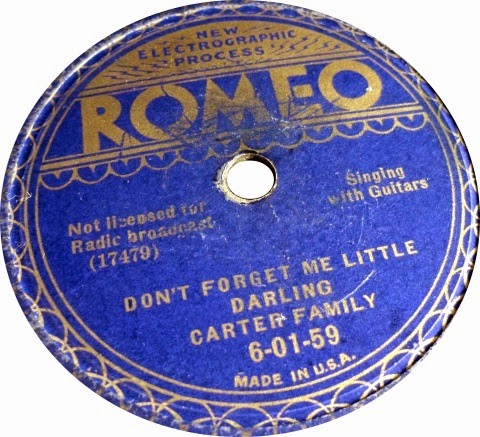