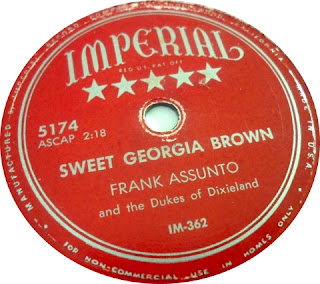 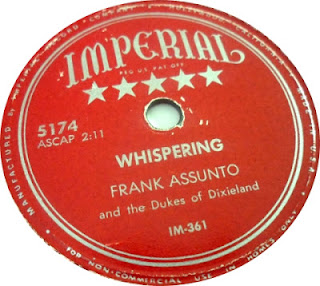 Here we have, what I believe, is the first recording by the famed duo, Mickey & Sylvia on Atlantic subsidiary Cat Records. While this may be their first, here is their biggest recording. 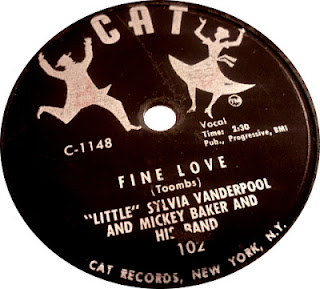 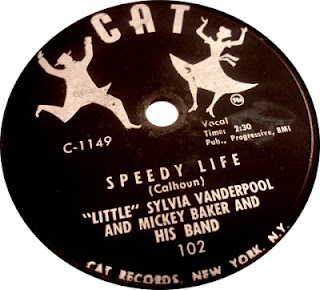 Born in , Lee was raised in , and began her musical career around 1920, singing and playing piano in her brother George Lee's band, which for a time also included Charlie Parker. She first recorded on the Merritt record label in 1927 with Jesse Stone as pianist and arranger, and launched a solo career in 1935.

As these titles suggest, she became best known for her trademark double entendre songs, or, as she once said, "the songs my mother taught me not to sing". The records were credited to 'Julia Lee and Her Boy Friends', her session musicians including Jay McShann, Vic Dickenson, Benny Carter, Red Norvo, Nappy Lamare, and Red Nichols.

She was married to Frank Duncan, a star catcher and manager of the Negro National League's Kansas City Monarchs. He, like Julia, was a native of .

Although her hits dried up after 1949, she continued as one of the most popular performers in until her death in , at the age of 56, from a heart attack. 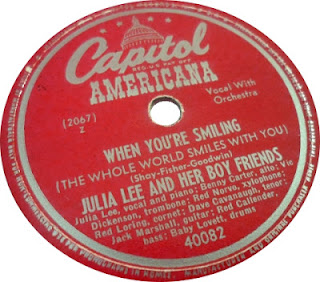 Apparently Moran & Mack (The Two Black Crows) made a movie. 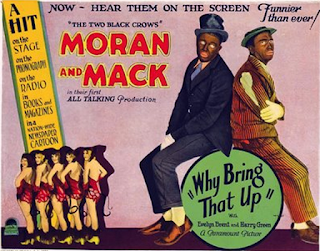 Here are two selections from that feature. 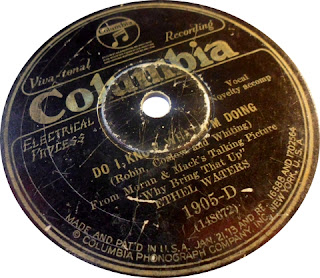 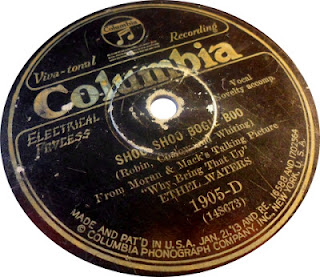 Al Miller recorded his first sides under his own name in 1927 for the legendary Black Patti label. He then switched to Paramount and Brunswick. He played with King Mutt & His Tennessee Thumpers for the Gennett label. Tampa Red popularized his tune, Somebody's Been Using That Thing.

Miller recorded four sides for Champion in 1936 (posted here are two of them) and accompanying him on these recordings are Cripple Clarence Lofton on piano and Odell Rand (of the Harlem Hamfats) on clarinet.

Apparently, nothing more is known about Miller after 1936. 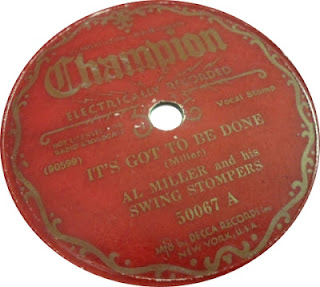 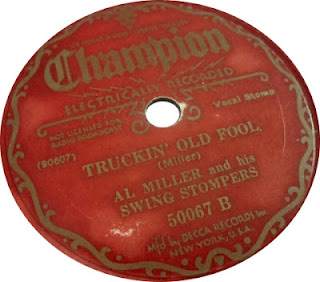 Here's Ida Cox recording on her (what I believe) second to last recording date before making an LP decades later. What a lineup playing behind her!

Recorded in New York on Halloween, 1939. 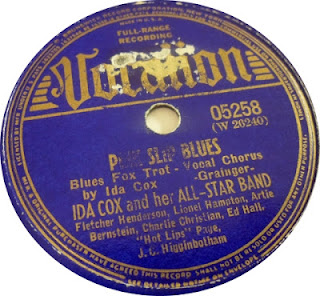 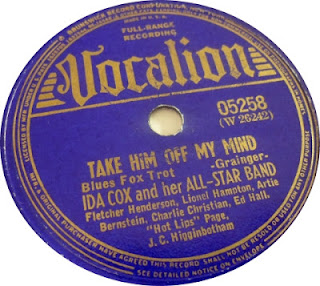 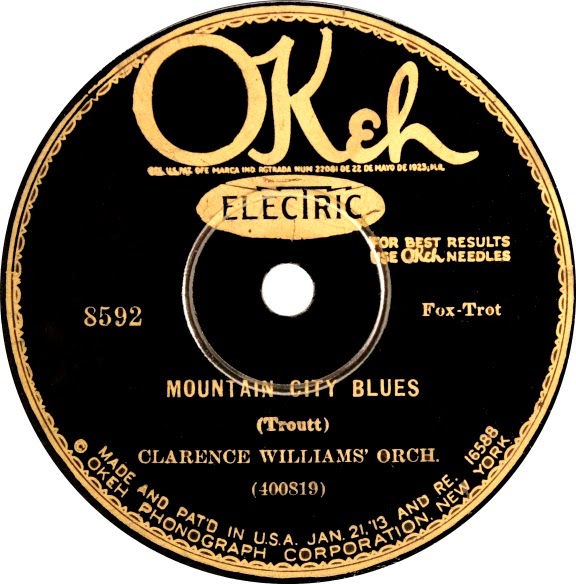 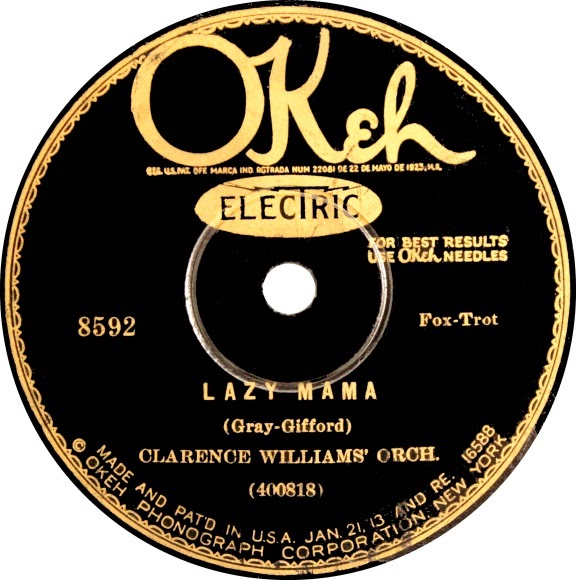 Hopped in the car this morning and made a trip into Alabama and came back with a few hundred records.

Although this record has seen better days, it was still exciting to find.

He was born in . Arnold Caplin, on the liner notes to the album Hot Pianos 1926-1940 reports that started playing the piano at age 12. His family objected strongly to his musical aspirations and sent him to a theological seminary, where he was expelled for playing ragtime.

's career began in the 1920s when he joined Banhoof's Traveling Carnival, a medicine show. His first fame came as accompanist to blues musicians Dora Carr and Ivy Smith. He also performed with Tampa Red. He recorded for many record labels, and was a talent scout and artist for Vocalion Records. suffered a stroke in the early 1930s and lost movement in his hands. He was washing dishes when he was found by the jazz pianist Art Hodes in 1938. Hodes assisted in his rehabilitation and helped him find new recording contracts.

His best-known tune was "Cow Cow Blues". In 1953, "Cow Cow Blues" was an influence on the Ahmet Ertegün-written "Mess Around" by Ray Charles' which was Charles' first step away from his Nat "King" Cole-esque style, and into the style he would employ throughout the 1950s for Atlantic Records.

"Cow-Cow Boogie (Cuma-Ti-Yi-Yi-Ay)" [1943] was probably named for him, but he did not write it. It was penned by Benny Carter, Gene de Paul and Don Raye. It combined the then popular "Western song" craze (exemplified by Johnny Mercer's "I'm an Old Cowhand") with the big band / boogie-woogie fad. The track was written for the Abbott and Costello film, Ride 'Em Cowboy.

claimed to have been the composer of "Mama Don't Allow It". He also said he had written the Louis Armstrong hit "I'll be Glad When You're Dead (You Rascal You)", but sold the rights and credit to others.

Cow Cow Davenport, who died in 1955 in , of hardening of the arteries, is a member of the Alabama Music Hall of Fame. 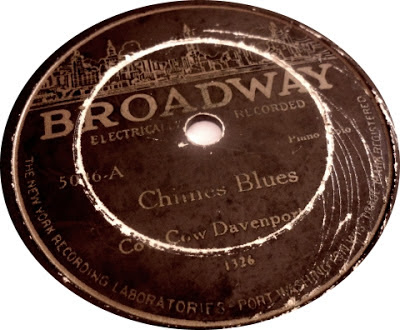 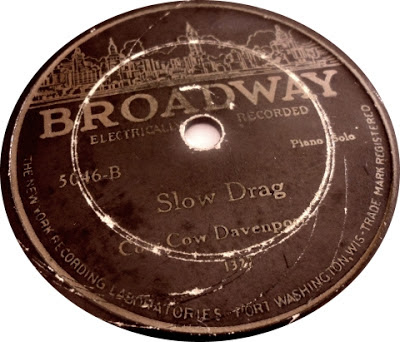 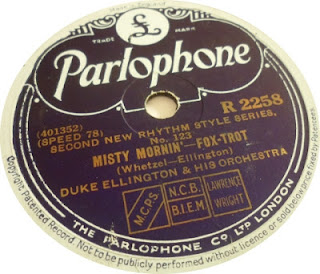 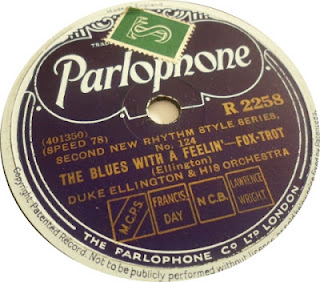