Just the week before, I took my oldest boy record hunting. We went up and down the highway to the usual haunts only to come up empty. Heading home, I decided to stop at the rattiest flea market building on the strip, one where I had never EVER found a decent record in fifteen years of living here.

Entering the non air conditioned building in the sweltering Florida summer heat, I almost turned around but the greeting from the elderly lady behind the counter caught me by surprise and I didn't want to walk back out appearing rude.

I meandered through the aisles and spotted the same old stack of records that had been there a half decade before...quite possibly the last time I had stopped there. Thumbing through real quick confirmed that.

At the end of the aisle, on the floor, was a milk crate full of dirt caked, dusty 78s. Bending down to pick up a few, I saw they were mainly rhythm & blues. Going all in, I squatted down, knees creaking and popping, and started flipping. Several Fats Domino Imperials, both old and new label designs, a one-off Jax Beer promo by Dave Bartholomew and two copies of, what turned out to be, Professor Longhair's 1949 debut record on a small Texas label, Star Talent, were the cream of the dusty crop. There were a few acetates but in the dim light, they looked liked nothing much to care about.

I gathered up 40 discs, leaving half which were either broken, too dirty or seemingly uninteresting, and made my way to the counter. The lady said the normal price was $2 each but since they were soon closing their doors, she'd let me have them at a buck a piece. I didn't counter and hoped that the dirt would clean off enough to get decent sound.

Got home and was pleased enough with the Bartholomew and Professor Longhairs to deem the stack a minor success. But...the next week passed and I wondered if I could have salvaged any that were left behind seeing how, once the dirt was cleaned off, several turned out to be in decent condition. So, after church the very next Sunday, and after dropping the kids off at the Grandparents, the wife and I headed out grocery shopping. On the way back, we stopped at the old ratty store to look around, myself going straight to the crate. The one record that had been weighing heavy on me was an acetate by Larry Darnell with a square ornate studio label from New Orleans...turned out it was the only one not there from before.

Feeling upset for not grabbing it the previous visit, I flipped through several times, front and back hoping it had stuck to the record next to it...but no...it had been snatched. I grabbed 20 more records, including two acetates, and again, headed to the counter. After chatting a bit more with the lady, I paid up with the same deal and headed to the house.

After putting away the few run of the mill Savoy, MGM and King labels to clean for another day, I began to take a closer look at the acetates (lacquers). Not sure what type of music may be on them judging from the group's name, and not knowing if the surfaces could even be cleaned enough to play, I set about trying to find out who and what they were.

Each label had the name and phone number of the studio printed on them with the group's name and lead vocalist in typewritten font between. The group's name was The Settlers. Googling produced nothing other than a 60s folk band...I hoped they weren't that band. Next, I searched the names of the three listed vocalists...Bobby Hendricks, Tommy Evans and "Carnation" Charlie Hughes...with Jimmy Oliver's name handwritten on one label. Search hits showed that each one had been a member of the early incarnation of the legendary rhythm & blues outfit, The Drifters...which ended their era in 1958 when a young Ben E. King and his group were hired en masse to replace them.

Excited, I then searched what to use (and not use) in order to get the visible caked dirt off and out of the grooves. Carefully, using distilled water, the clumps actually started to release and a relatively smooth surface with minimal flaking...in the intro grooves only...emerged. There were still some issues that I knew would add to the playback sound but the main hurdle had been cleared.

After drying off, I set a platter on the turntable and gave it a spin. Sugar Plum was a great one to start off with as it was very reminiscent of the Clyde McPhatter led Drifters', Honey Love. I was happy that the side played all the way through even with the moderate noise and proceeded to transfer the rest with the similar surface noise results.

I was just beginning to wonder if these had ever been released commercially and hopped back on the computer to take a look. Nowhere to be found. Only one song was a standard (Irving Berlin) that had been around since the early 30s and covered by a who's who of great singers including Billie Holiday.

Another search of a particular vocalist, Bobby Hendricks, showed that he was still touring as the last surviving member of the early Drifters. His website had a contact button so I sent him an email asking if he could provide information about the recordings.

The next morning I received a very cordial email from his wife, Ruth, saying he could not recall the name of the group nor the titles of the song. She joked that at 77 his memory wasn't like it used to be. And she closed by saying if I discovered any new information to please let them know.

I replied, thanking her for her time and attached a label photo and audio file of Sugar Plum. After listening to the song, she wrote that it was like a shot in his arm...he was losing so many friends in the business and hearing something from the past, even if he couldn't remember where and when, made him feel good. Yet again, I replied attaching his second vocal performance...a rockin' and driftin' rhythm with no name as this was the missing label. An even quicker reply came back saying how exciting this was. He was wracking his brain trying to come up with any information. She even said I could give him a call to talk about the good old days. My heart jumped.

It took two nights to work through nerves to place the call. He answered and we started to chat. Again, no sudden revelations but instead, a wonderful talk with a guy who was on the scene in the 50s. He did, though, quell a theory I had about which particular Drifter the records may have personally belonged to. We promised to stay in touch and said our goodbyes.

Not knowing which way to proceed, I turned to Marv Goldberg and his website. Being one of the world's foremost authorities and historians on R&B / Doo Wop groups, I contacted him, giving the whole spiel in an email and waited. His reply was waiting bright and early in the inbox. He gave his thoughts and theories and using his vast collection of interviews, research and a quick call to Bobby Hendricks, he even narrowed the recording date down to the first two months of 1958. He also presented several more questions than I originally had.

Now comes the task of getting these, apparently, one of a kind snap-shots of Doo Wop / Rhythm & Blues history transferred and mastered before they truly become lost Drifters' recordings. 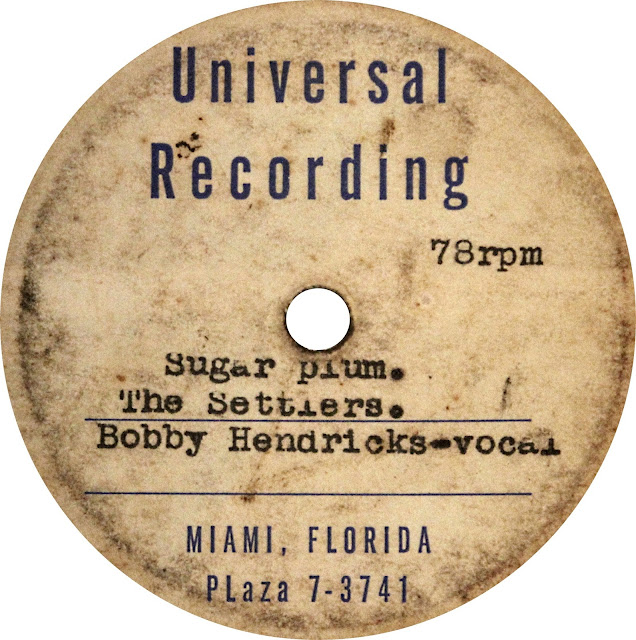 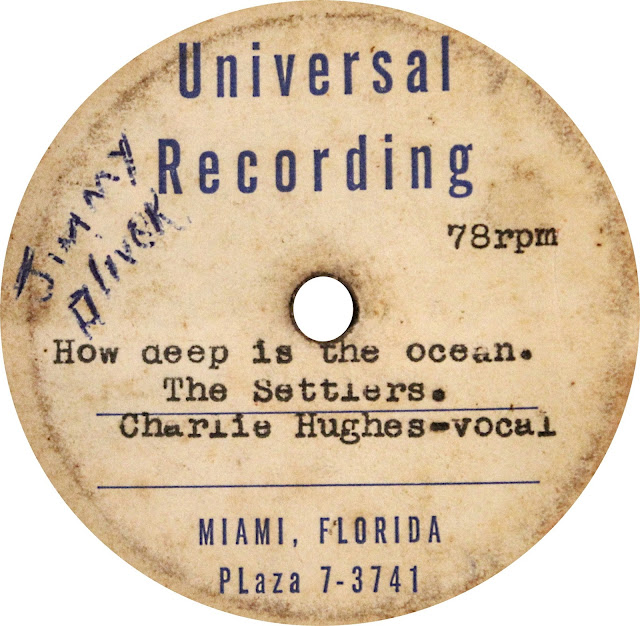 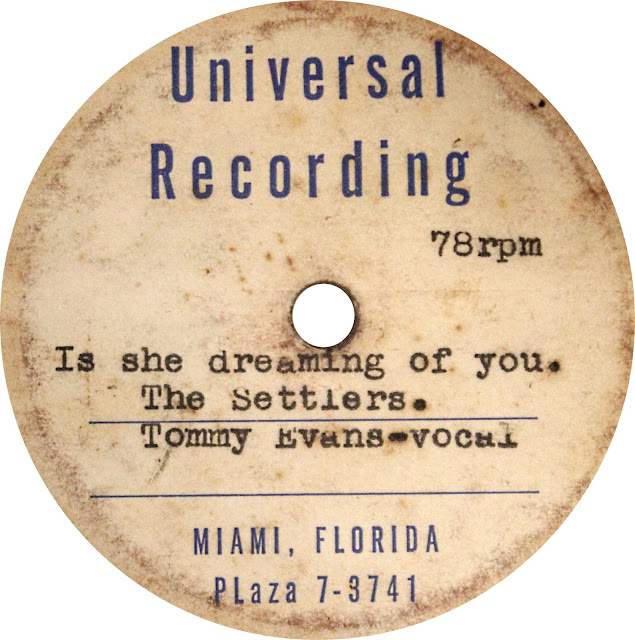 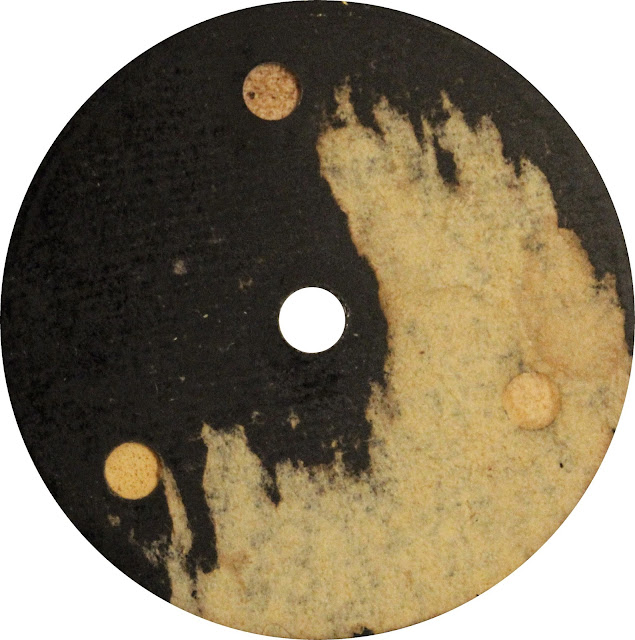