Looks like this is the first of three releases for the duo on Ace Records.

Born and raised in , grew up listening to the sound of New Orleans marching bands. He began playing saxophone when in the Navy, and by 1950 had joined Dave Bartholomew’s R&B band. He also played jazz in club jam sessions. He made his recording debut on Fats Domino’s The Fat Man (1949) and went on to play on sessions for Little Richard, Lloyd Price, Aaron Neville, Lee Dorsey, Dr. John, and numerous other rhythm and blues artists.

From the mid-1960s he worked as a liquor salesman. He also began leading his own jazz band in clubs and hotel residencies in . While the baritone saxophone had been his primary instrument during his years as a studio musician, his jazz playing gradually came to rely much more on tenor saxophone. In the mid-1980s he recorded two jazz albums, Graciously and Heritage, with vocals by Johnny Adams and Germaine Bazzle, for Rounder Records.

At the age of 65, he had a daughter Tajara Brieanne Simms, who currently lives in . 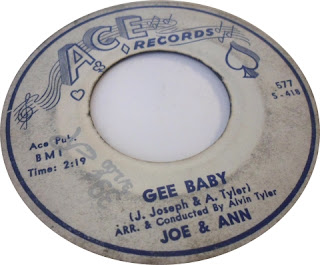 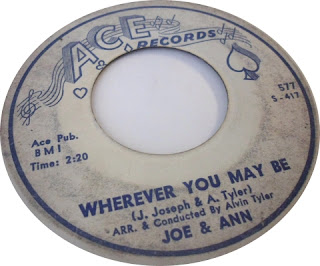 Email ThisBlogThis!Share to TwitterShare to FacebookShare to Pinterest
Labels: Ace 577, Alvin Tyler, Gee Baby, Joe And Ann, Wherever You May Be