Born in , Boze began playing in a high school band, which also featured Illinois Jacquet, Arnett Cobb, and singer Charles Brown. He went on to play in the bands of Marvin Johnson and then Larkins, again with Jacquet and also Eddie Vinson.

After wartime service he settled in and, as singer and trumpet player, took part in the development of the jump blues style, heavily influenced by Louis Jordan. Boze first recorded in 1945, but his biggest successes came with Aladdin Records after 1949. In May 1950 he released "Safronia B", a classic if unsophisticated recording which, with its refrain of "I surrender! I surrender!", epitomised the sense of fun in the West Coast music scene just before the dawn of rock and roll. It made #9 on the Billboard R&B chart in June 1950, and has since been included on several anthologies of the period. The song was later recorded by The Manhattan Transfer.

He toured widely around this time, particularly with Dinah . However, his later recordings, including "Looped" and an early version of "Lawdy Miss Clawdy", were less successful, and he did not record after 1952. He continued to play at jam sessions around , while also developing a career as a social worker and school teacher, before his death, aged 53, after prolonged ill health. 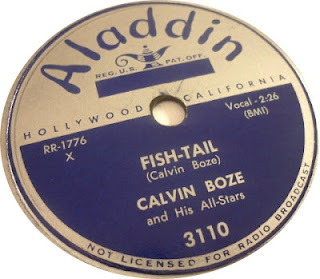 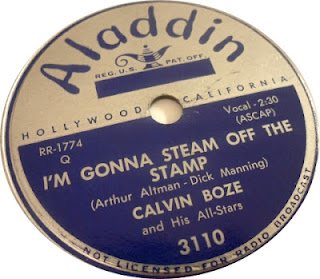 Email ThisBlogThis!Share to TwitterShare to FacebookShare to Pinterest
Labels: Aladdin 3110, Calvin Boze And His All Stars, Fish-Tail, I'm Gonna Steam Off The Stamp