The Georgia Melodians were an early jazz band that was active in the 1920s and recorded for Edison Records. They were from and the joint leaders were Ernie Intelhouse (cor) and Hill Hutchins (cl, ts, bsx). After being together for a few years, they worked their way up the east coast to , where they arrived in February 1924. After some changes in personnel, they were playing opposite the Paul Van Loan Orchestra at the Cinderella Ballrom on 48th and Broadway. Around this time they started to record and throughout 1924 they made 26 sides that were released on 78 rpm Phonograph record. The band broke up towards the end of 1924 and left their regular gig at the Strand Roof. Their last booking was a New Year's Eve Ball at the Hotel Alamac. 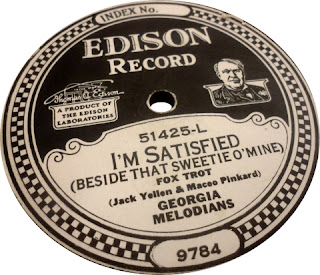 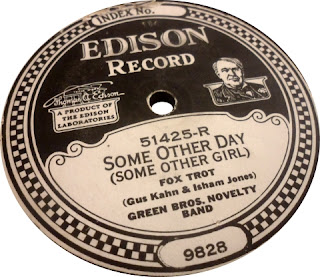 Email ThisBlogThis!Share to TwitterShare to FacebookShare to Pinterest
Labels: Edison 51425, Georgia Melodians, Green Bros. Novelty Band, I'm Satisfied (Beside That Sweetie O'Mine), Jazz On Edison, Some Other Day (Some Other Girl)