In September 1934, Prima began recording for the label. He recorded "That’s Where the South Begins", "Long About Midnight", "Jamaica Shout", and "Star Dust". Prima and his New Orleans Gang was a band that consisted of five musicians. Frank Pinero was the pianist, Jack Ryan played bass, Garrett McAdams played guitar, while Pee Wee Russell played clarinet. The band had their first performance at a club called the “Famous Door” owned and operated by Jack Colt. Prima’s stage presence and combination of scat and swing style allowed jazz to reach a new level. His recordings from 1935 were a combination of Dixieland and swing. 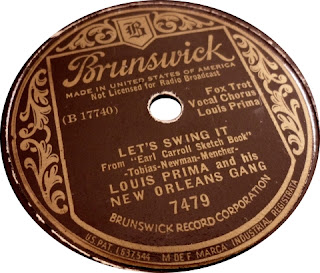