Here we have Walter Barnes & His Royal Creolians first release. Two sides were cut for Vocalion a month before but were unissued.

Unfortunately, Barnes and his band were the subject of one of the most tragic episodes in the history of jazz.

Barnes grew up in Chicago and studied under Franz Schoepp in addition to attending the Chicago Musical College and the American Conservatory of Music. He led his own bands from the early 1920s in addition to playing with Detroit Shannon and his Royal Creolians. After Shannon's retinue became dissatisfied with his leadership, Barnes took control of this group as well. He played mostly in Chicago, though the band did hold a residency at the Savoy Ballroom in New York City as well. His band recorded in 1928-29 for Brunswick Records. He toured the American South in the 1930s to considerable success, touring there yearly; by 1938 his ensemble included 16 members.

Barnes was one of the victims of the Rhythm Club Fire in Natchez, Mississippi on April 23, 1940. He played in an eight-piece band that night when the club caught fire; he had the group continue playing the song Marie in order to keep the crowd from stampeding out of the building. Nearly all of the band's members (which included Paul Stott and vocalist Juanita Avery) except for drummer Walter Brown and bassist Arthur Edward, were among the 201 victims of the fire. Barnes's death was repeatedly immortalized in song thereafter.

Was just informed about a documentary on this very subject. 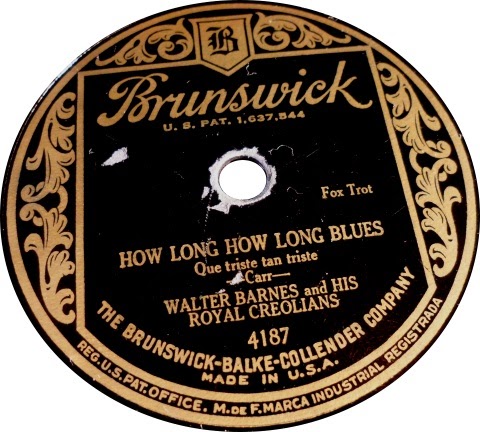 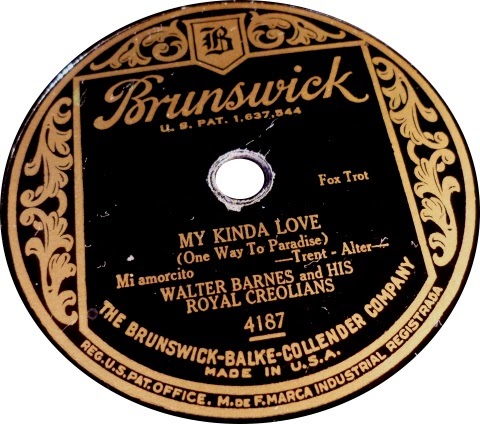 Email ThisBlogThis!Share to TwitterShare to FacebookShare to Pinterest
Labels: Brunswick 4187, How Long How Long Blues, My Kinda Love (One Way To Paradise), Natchez Fire, Walter Barnes And His Royal Creolians