Here's an interesting version of W.C. Handy's The Hesitating Blues.


Conway Tearle’s third wife, Roberta Hill, filed for a divorce in 1917 after detectives she hired found him in a hotel room with Adele Rowland, a musical comedy actress and dancer. The two claimed they were just rehearsing a play as Rowland explained later, “As to the robe in which I was clad, it's the custom in the profession to read plays attired like that.”


The following February, Tearle and Rowland wed; remaining together until his death some twenty years later. Adele Rowland was the former wife of actor Charles Ruggles and was well known at the time for introducing to the song Pack Up Your Troubles In Your Old Kit Bag And Smile, Smile, Smile which she sang in the 1915 musical Her Soldier Boy. Adele Rowland was born in Washington D.C. on July 10, 1883 and died in Los Angeles on August 8, 1971. 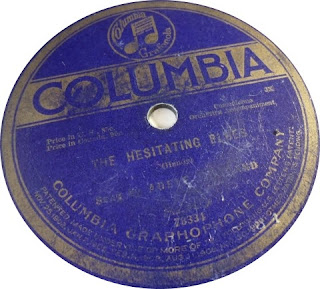