It looks as if Reisman's side is from his third recording session and the last of only five sides he waxed for Vocalion as he recorded exclusively for Columbia and then Victor afterwards. No personnel other than Reisman on violin are listed. 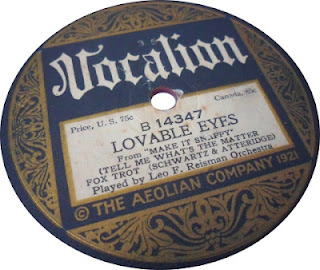 The only one listed for many of Yerkes' bands is New Orleans trombonist Tom Brown. (Click here for Tom Brown on Brownlee's Orchestra of New Orleans lone record...also Sharkey Bonano's first recording)

Tom P. Brown was born in Uptown New Orleans, Louisiana. His younger brother Steve Brown also became a prominent professional musician. He played trombone with the bands of Papa Jack Laine and Frank Christian; by 1910 usually worked leading bands under his own name. The band played in a style then locally known as "hot ragtime" or "ratty music". In early 1915, his band was heard by Vaudeville dancer Joe Frisco who then arranged a job for Brown's band in .

On May 15, 1915, Tom Brown's Band from Dixieland opened up at Lamb's Cafe at Clark & Randolph Streets in Chicago, with Ray Lopez, cornet and manager; Tom Brown, trombone and leader; Gussie Mueller clarinet, Arnold Loyacano piano and string bass; and Billy Lambert on drums. In Chicago Gussie Mueller was hired by bandleader Bert Kelly, and his place was taken by young clarinetist Larry Shields.

This band seems to be the first to be popularly referred to as playing "Jazz", or, as it was spelled early on, "Jass". According to Brown, once his band started enjoying popularity the local musicians union began picketing his band of non-union out-of-towners. One picketer's placards intended to link Brown's band with the Storyville prostitution district of New Orleans and the implied disreputable low life status; the signs read "Don't Patronize This Jass Music". The term "jass" at that time had a sexual connotation. The signs had the opposite of the intended effect; more people came to hear the band out of curiosity as to what "Jass Music" might be and how it could be performed in public.

Brown realized the publicity potential and started calling his group "Brown's Jass Band". Some recently rediscovered newspaper advertisements list it as "Brown's Jab Band" or "Jad Band", confirming the reminiscences of Ray Lopez that the bandmembers assumed that "Jass" was too rude a word to be printed in the newspapers so they looked in a dictionary for printable words close to it, like "jade".

Years later, Brown would frequently brag that he led "the first white jazz band" to go up north. Brown's careful wording implies that he was aware that the Original Creole Orchestra preceded him and that they played jazz.

Tom Brown's Band enjoyed over four months of success in before moving to , where it played for four months more before returning to in February 1916. Upon arriving home Brown immediately started rounding up another band to go back to with him. The group again included Larry Shields; at the end of October, Brown agreed to switch clarinetists with the Original Dixieland Jass Band bringing Alcide Nunez into his band. Brown, Nunez and drummer Ragbaby Stevens then went to work for Bert Kelly, who brought them to where they temporarily replaced the Original Dixieland Jass Band at Reisenweber's in 1918. Brown started doing freelance recording work with dance and novelty bands, then joined the band of Harry Yerkes. At the start of 1920 he was joined in the Yerkes Band by Alcide Nunez.

Tom Brown also played on Vaudeville in the acts of Joe Frisco and Ed Wynn.
About late 1921 Brown returned to and joined Ray Miller's Black & White Melody Boys, with whom he made more recordings. During this period he also co-lead a dance band with his brother Steve.

In the mid 1920s he returned home to where he played with Johnny Bayersdorffer and Norman Brownlee's bands, making a few excellent recordings.

During the Great Depression he supplemented his income from music by repairing radios. He opened up a music shop and a junk shop on . He played string bass in local swing and dance bands. With the revival of interest in traditional jazz he played in various Dixieland bands in the 1950s, notably that of Johnny Wiggs. A local television station thought it would be a good idea to invite Brown and Nick LaRocca to talk about how jazz first spread north from , but the show had scaresly started before the two old men got into an argument that turned into a fist-fight.

Tom Brown made his last recording just weeks before his death, his trombone playing apparently not suffering from the fact that he had neither teeth nor dentures at the time. Brown died in . 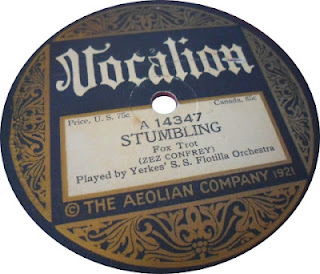