The Jubilee shows were produced by the Armed Forces Radio Service and featured entertainment directed towards African American servicemen overseas during the mid to late 40s.

I recently found a batch of 78s and included were about a hundred 16 inch transcription discs (they are heavy!). There are a handful of shows such as Jubilee, Mail Call, At Ease, Yarns for Yanks, Service Digest, Music From America as well as discs of specific bands and orchestras.

This episode of Jubilee has a great lineup. Emcee'd by Ralph Cooper (The Duke Is Tops), Claude Hopkins & His Orchestra, Stuff Smith & His Trio, pianist Dorothy Donegan, comedian Pigmeat Markham (a fellow Tarheel), Dan Burley and Colonel Stoopnagle (F. Chase Taylor). Una Mae Carlisle is mentioned in the introduction but I did not hear a performance by her in the show.

Each side is about 15 minutes so sit back and enjoy! 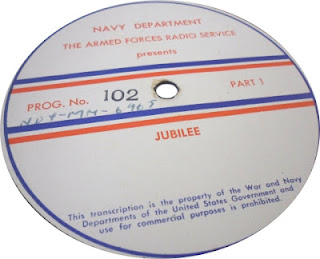 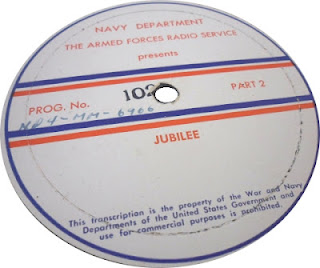