Just ran across this 78 in the garage and didn't recognize either orchestra. (Don't read too much into that.)

Besides a wikipedia entry, I also found a blog dedicated to Dan Gregory and his sidemen.

Dan Gregory was an American pianist and bandleader, mainly working in from the 1920s through the 1940s. However, the band also appeared in during the early 1920s.

According to Ken Frew, the son of Kenneth "Kenny" Frew (1902-1986), a later member of Gregory’s orchestra, the band’s residence was the at 66th and Broadway. During its New York years Gregory’s band made a handful of records, first for lesser labels such as Oriole, Puritan, Grey Gull and Cameo but also two sides for the major label Victor (Me And The Boy Friend and Then You'll Know That You’re In Love issued on Victor 19519 and 19554 respectively). One of the members of Gregory’s orchestra during its tenure was multi-instrumentalist Andy Sannella, though it is not known whether he appeared on any of the bands recordings.

Gregory finally (according to Frew) decided to get "rid of his high-priced men" and move back to and organize a new band which went on working through the following two decades. The band however also travelled to venues outside its home town and among other places it played at the Bertrand Island amusement park, where it appeared (as "Dan Gregory’s Famous Dance Orchestra") with comedian Clem ”Fat” Gority in 1934.

According to Ken Frew, Gregory's outfit toured 29 states and , ports that included , , , , , , and Gregory later, apart from leading his own band, "went on to manage Tony Pastor’s Orchestra and helped discover Rosemary Clooney".

Recently the nephew of Ray Ripani, Gregory’s tenor saxophone player during the late 1930s and early 1940s, has put up a website devoted to Dan Gregory and his orchestra (see "external links" below), gathering information and documents about the band. 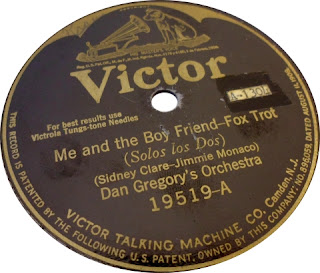 Jack Chapman lead the band at the Drake Hotel which was located at in . Chapman's band was also the "official orchestra" for  radio station, WDAP. 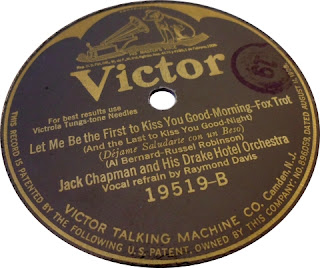 Email ThisBlogThis!Share to TwitterShare to FacebookShare to Pinterest
Labels: Andy Sannella, Dan Gregory's Orchestra, Jack Chapman And His Drake Hotel Orchestra, Let Me Be The First To Kiss You Good-Morning, Me And The Boy Friend, Victor 19519