Just acquired one more side by Jimmie Gunn & His Orchestra, a territory band based out of . (Here are 2 more) Got three more to find.

This side, like all six of their recordings, were recorded in the Southern Radio Corporation's 2nd floor warehouse in on .

As before, I am listing both personnel listings that I have run across. 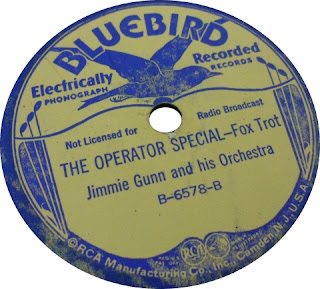 Email ThisBlogThis!Share to TwitterShare to FacebookShare to Pinterest
Labels: Bluebird 6578, Jimmie Gunn And His Orchestra, The Operator Special