I went looking for 78's a few days ago and found this chocolate colored wax (never seen one before) Decca record in the middle of a bunch of Perry Comos, Tony Pastors and the like. I had never heard of Doles Dickens but the song titles and description prompted me to get it. The tracks were "Rock And Roll" and "Hold Me Baby" and the latter was described as a "Blues Vocal."

A little bit of internet searching netted me the information that Dickens was a bass player that hit the scenes with Eddie South's group in 1940. Further reading mentioned his role in the early rock & roll / rhythm & blues styles.

With one of the songs being called "Rock And Roll," it got me curious as to what may be considered the first R&R record. I have read that The Dominoes' "Sixty Minute Man" and Jackie Brenston's (with Ike Turner) "Rocket 88," which were both recorded in 1951, are widely argued as being the first.

Are there any other serious contenders out there? Anything earlier? What makes a song "Rock & Roll?" 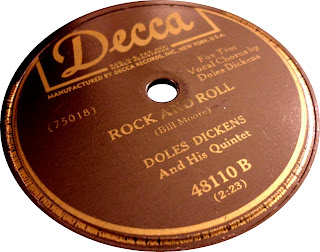