Milton's grandmother was a Chickasaw. He was born in Wynnewood, Oklahoma, United States, and grew up on an Indian reservation before moving to Tulsa, Oklahoma. He joined the Ernie Fields band in the late 1920s as singer and, later, drummer.

Moving to Los Angeles, California, in 1933, he formed his own band, the Solid Senders, with Camille Howard on piano. He performed in local clubs and began recording in the 1940s, his first release being Milton's Boogie on his own record label. His big break came in 1945, when his R.M. Blues, on the new Juke Box label, became a hit, reaching number 2 on the Billboard R&B chart and No. 20 on the pop chart. Its success helped establish Art Rupe's company, which he shortly afterwards renamed Specialty Records.

Milton and his band became a major touring attraction, and he continued to record successfully for Specialty Records through the late 1940s and early 1950s. He recorded a total of 19 Top Ten R&B hits, the biggest being Hop, Skip And Jump (# 3 R&B, 1948), "Information Blues" (# 2 R&B, 1950), and "Best Wishes" (# 2 R&B, 1951). He left Specialty in 1955. However, releases on other labels were unsuccessful, and the development of rock and roll had rendered him something of an anachronism by the middle of the decade.

Nevertheless he continued to perform, appearing in 1970 as a member of Johnny Otis' band at the Monterey Jazz Festival, and resumed his recording career in the 1970s with albums for Kent Records (# KST-554), "Roots Of Rock, Vol. 1: Roy Milton" and the French label, Black & Blue (# 33.114), Instant Groove.

Recorded in Los Angeles in September, 1945. 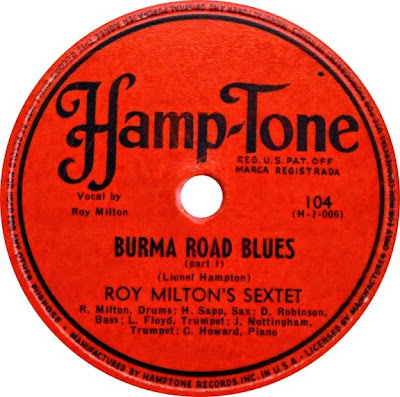 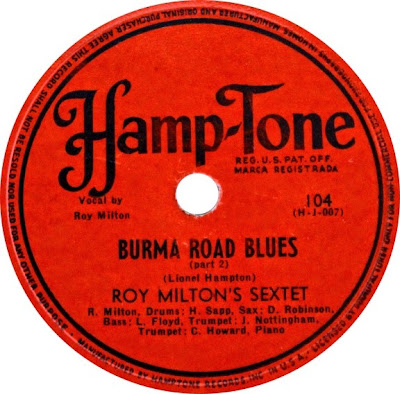