Searching the internet, found one source that stated this was Gene Krupa's first recording session but quickly discovered that less than four months earlier, in December of 1927, his debut was made with McKenzie and Condon's Chicagoans.

Thelma Terry, née Thelma Combes (September 30, 1901 – May 30, 1966) was an American bandleader and bassist during the 1920s and 1930s. She fronted Thelma Terry and Her Playboys and was the first American woman to lead a notable jazz orchestra as an instrumentalist.

Terry was born in Bangor, Michigan in 1901. Her parents divorced when she was very young and she moved with her mother to Chicago, where the latter was employed as a servant for the wealthy Runner family. When the young woman was given the opportunity to receive musical training with the instrument of her choice, she chose to study the string bass. Her early years were spent on the road performing in Chautauqua assemblies. After graduating from Austin Union High School, she earned first chair in the Chicago Women's Symphony Orchestra. As this did not provide her with a living, she eventually turned to jazz.

A stint at a local Chicago theater in the spring of 1927 and an article in Variety brought national attention to Thelma Combes. The newly formed Music Corporation of America took notice. They renamed her Thelma Terry and in April 1927 organized for her an all-male band (including a very young Gene Krupa) called Thelma Terry and Her Playboys. Some sources state that the band's home was The Golden Pumpkin nightclub located at 3800 West Madison in Chicago, and that the Playboys may have been the house band. MCA billed Terry as "The Beautiful Blonde Siren of Syncopation", "The Jazz Princess", and "The Female Paul Whiteman". At least one musician, Bud Freeman, was so enthused by the quality of the band that he paid another musician to fill his seat in the Spike Hamilton Band so he could join the Playboys. The band was soon sent by MCA on a national tour that took them down the Eastern Seaboard and as far west as Kansas City.

Terry found the day-to-day work of acting as a bandleader difficult. Bill Otto, a pianist who recorded with her in Chicago, recalled that she was a beautiful woman (in his words, "even voluptuous"), and that he got along with her because (unlike other band members) he did not make unwelcome advances to her. She also found that the male musicians were unwilling to follow her directions, and that the work itself, and especially the travel, was lonely and difficult to endure.

In 1929, MCA decided that Terry and her band would begin an international tour beginning in Berlin, Germany. However, by that time she had met Willie Haar, the owner of a Savannah, Georgia winter resort at which the band played during their 1929 tour. Terry disbanded the Playboys and quit MCA to marry Haar and settle down in Savannah.

Terry married Haar in 1929 and had a daughter, Patti, in 1931. She divorced Haar in 1936 and tried to make a comeback in Chicago. Disappointed with her lack of success, Terry sold her string bass, turned her back on the music profession, and took a job as a knitting instructor. In the 1950s she moved to Michigan, where she met with Gene Krupa, the drummer for the Playboys. Krupa told her that he was sorry she was not mentioned in his 1959 biographical movie The Gene Krupa Story. She spent her last years with Patti and her family in Michigan. 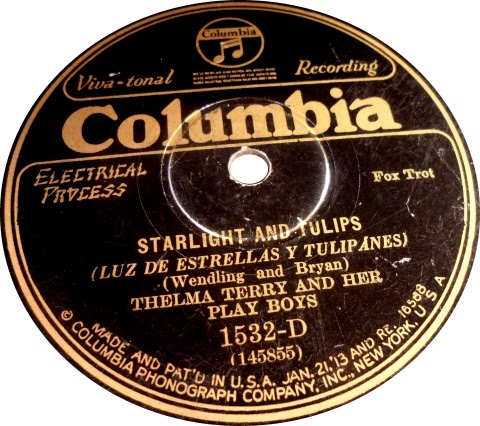