Blue grew up playing in local bands in St. Louis, Missouri, where his father was a part-time music instructor. He played with Wilson Robinson's Bostonians, a territory band, and worked with Charlie Creath and Dewey Jackson in the middle of the 1920s. Later that decade he worked with Andrew Preer's Cotton Club Orchestra in New York City and on tour in Europe as a member of Noble Sissle's ensemble. He remained in Paris briefly, playing with John Ricks.

When he returned to New York, he joined The Missourians, led by Cab Calloway, then worked with Luis Russell. Due to failing health, Blue played little in the late 1930s and afterwards; he spent the last several years of his life in a sanatorium.

Cab's sister, Blanche, recorded It Looks Like Susie a little less than a month earlier...that date being one of Ben Webster's earliest on wax. Click here to take a listen. 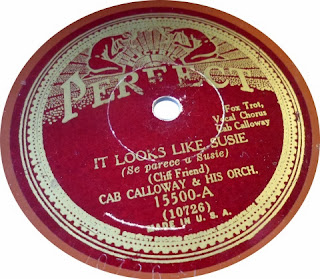 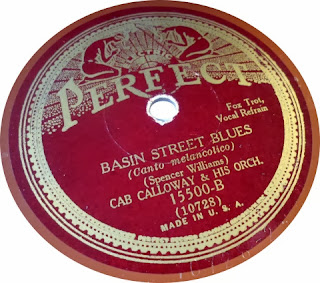 Email ThisBlogThis!Share to TwitterShare to FacebookShare to Pinterest
Labels: Basin Street Blues, Cab Calloway And His Orchestra, It Looks Like Susie, Perfect 15500