Born Rosa Deschamps in Henderson, Henderson County, Kentucky, she is remembered as one of the greats of the 1920s and 1930s classic blues era. Her career as an entertainer began in 1913 when she joined her uncle's circus troupe.

She married Douglas "Slim" Henderson in 1918 and began travelling with his Mason-Henderson show. Her career as a musical comedian started during the early 1920s, after she moved to New York where she performed on Broadway and eventually in London.

She sang the chorus on Fletcher Henderson's May 28, 1924, Vocalion recording of "Do That Thing", probably the earliest example of a female singing with a big band.

Although she began to show a marked decline in her recordings after 1926, she continued performing up until 1932 when she took a job in a New York department store.

She continued to perform benefit concerts up until the 1960s. Henderson died in Roosevelt Island, New York. 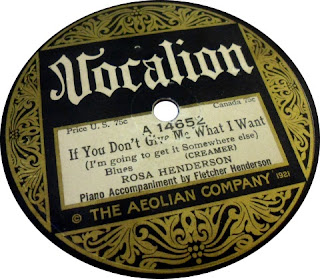 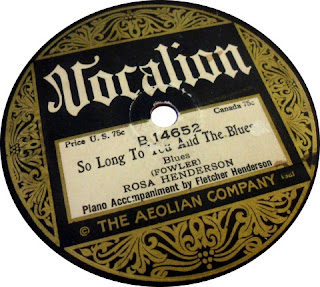 Email ThisBlogThis!Share to TwitterShare to FacebookShare to Pinterest
Labels: Fletcher Henderson, If You Don't Give Me What I Want (I'm Going To Get It Somewhere Else), Rosa Henderson, So Long To You And The Blues, Vocalion 14652