What Is It About The Boogie Woogie Bugle Boy?

I recently saw an eBay listing for an Andrews Sisters' 'Boogie Woogie Bugle Boy' on Decca 3598 go for good chunk of change. I have to admit that I was (and still am) surprised at that. I searched completed listings to find find this particular tune was consistently way above what I would have thought an Andrews Sisters' 78 would command.

Feeling that I had to have had several copies of this record in my boxed up 78's in the garage...I proceeded to search. When I had finished flipping through each box, I found that I didn't have a single one. Oh...I had a ton of 'Rum & Coca Colas' and other well known hits but no Bugle Boys.


I tried to search the net for a reason this record was performing like it was but to this day, I haven't cracked the case.

I finally found a blue Decca 3598 while searching through a lot I had purchased not too long ago, and it being in not too good of shape, listed it to see how it would turn out. (It turned out pretty good and right in line with past performances.) 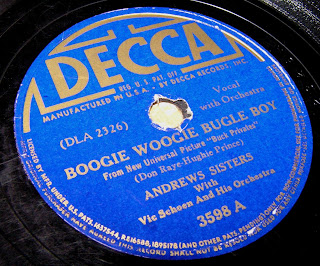 I am now asking if anyone happens to know why this record is such a relatively wanted item.
Posted by HeyPally